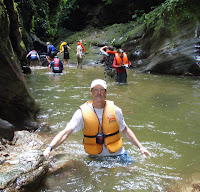 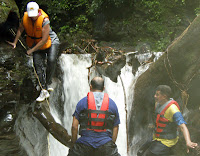 Took a day off from boat work to go on the Gorge trip with Jesse, Snake and Gaston. The trip down the road and back up again was the worst - more than a 45 degree angle.
It was, again, another great Jesse and Snake tour - informative - lessons on plants and fruits - wild oranges, plums, apples, the bread from coconut.
The torrential downpour didn't start until we'd left the waterfall and river, so we were lucky there. Although, climbing up the hills in mud was definitely a challenge. Thankfully for me, I was behind Gaston and hanging on to him while we worked our way up!
Our 'Jesse' group was ourselves, Mark (Sea Cycle), Rose (Sojourn), LeVonne (Transition), Paul and Janey (Shian), Ann and Steve (Receta), and one other couple that we never got the name of.
Made it to the waterfall and were told that we were the first group in a long time to make it that far. Tell that to my legs the rest of the week when I had to climb up the ladder on the hard!!
Jesse stopped by the airport on the way home to get us doubles, since the usual stand was closed in the morning. Doubles are served on a piece of waxed paper, which is considered your napkin. It's two pieces of an Indian flatbread with a curried chickpea filling, with hot sauce and other spices. The big trick is to not dribble it all over yourself, since the one piece of bread is supposed to act as your spoon to scoop the stuff off the second piece of bread! Yeah, right!!! The doubles were Jesse's treat. Wow, how great is he??
We finally got back to the boat, exhausted and filthy, about 7 at night. A 13 hour day, but well worth it.

Posted by audreypaige at Wednesday, December 05, 2007