Through the reef at Los Roques at 2:30 in the afternoon for our overnight sail to Tortuga. Nereia should already be there. We're going to try to anchor on the west side of the island where we were told the fishing was good. What we need with more fish is beyond me, but someone on this boat lives to fish. A very boisterous sail! Started off going fast with waves not too bad. Nighttime came, with my watch, and the wind had picked up and we kept getting slapped with a large wave out of nowhere. Plus, we were heeled over way too much for my comfort. I don't enjoy sitting in the helm seat, but I'm standing up. Oops, over the edge?

I announced that if anyone on this boat cared, I was not having a good time. My point was made and the staysail was brought in. Oh, and did I mention we found out that the porthole on the starboard side leaks if too much water runs down the deck? Wet setee cushions! Really not having a good time. Not a bad sail, until the rain came. Not my watch, I went below to sleep. I had packed the rainpants away ages ago, since we hadn't used them in forever and ever. Poor Dennis was cold and wet, so I dug them out for him. At least he had a rain jacket. Then the wind died totally and we motored the last two hours. Called Nereia on the radio and they informed us that the anchorage on the west side was not a good one, very rolly, so we agreed to meet in Cayo Herradura. We were there before and I loved it. 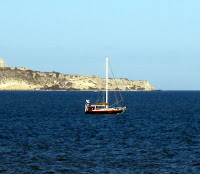 Dropped the anchor at 10:15 a.m. Not too bad, 20 hours. Then, who motors around the corner but Dan and Jaime on Nereia. So glad to see them again. They had us over for dinner (so nice not to cook), and we traded all the boat supplies we picked up for them in Curacao for the beer 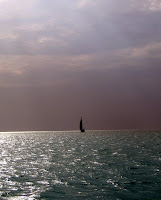 , wine and Diet Coke they brought for us. Woo hoo!!! Had them over for dinner the following night to share all that fish we'd caught.
Kim and Scott on Anthelide, another Michigan boat we had met in the marina at PLC, pulled in shortly after and stopped by for a short visit. They're on their way west and we got this great shot of them setting out for Los Roques. Paul, Kim and their 3 year old twins, Alastair and McKenna, arrived on Brio from Los Roques. We had met them in Bonaire. They just bought the boat and are starting to cruise. Tried to give them a few helpful hints on places to see in the Eastern Caribbean and places to anchor in Grenada.
I was starting to get a bit anxious about getting back to the marina and checking into Venezuela, so we looked at the weather and decided that we should leave Cayo Herradura on Tuesday to sail down to Playa Caldera, and then leave Wednesday morning for Chimina Grande. Both Nereia and ourselves checked the weather and it looked like Wednesday was the best day to leave or we'd be there until the middle of the following week. Just as we were getting ready to leave Cayo Herradura, Kim from Brio called and asked if Dennis would help Paul with one of their engines. It just decided to quit. No problem, it was a short trip down the coast. Besides, two brains always work better than one. Dennis said the kids were adorable, watching their every move and asking questions. Motorsailed down the coast and hooked a HUGE barracuda. Way too big to eat and way too many teeth to put into the cockpit. I swear, Dennis is going to hurt himself one time trying to get his precious lure back! Like last time, really rolly in Playa Caldera, so we rigged a bridle, and Dennis talked Dan through how to do it. They were thrilled at the difference it makes.
Up the next morning and finally left the anchorage just after 5. The winds and waves weren't quite as forcasted and we had an unbelievable current against us. All in all, quite a miserable day. I once again announced that I was not having a good time but, unfortunately, nothing could be done about it. I was dreaming of Winnebagos! Everything on the starboard side was wet from leaks, and then I hadn't shut the seacock off for the sink and the water sloshed up and over the counter and into where I keep my pots and pans, tupperware, etc. Really not a happy camper.

Finally, the day was almost over, and we motorsailed the last couple of miles accompanied by lots of dolphins. The high point of the day! Dropped the anchor in Cieneguita on Chimana Grande just after 4 p.m. and Nereia and Audrey Paige agreed that this had not been a good day! Off to the marina tomorrow to really clean up the mess! ~~~_/)~~~
Posted by audreypaige at Wednesday, May 21, 2008