In the Boat Yard

Well, here we are, being hauled out of the water at Aquavi - something we really hadn't planned on - but the cutlass bearing just kept getting a little more 'play' to it all the time. What a lot of 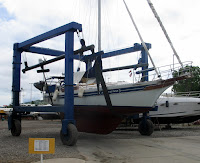 work. We didn't want to have the bottom power washed and get rid of all that nice, expensive ablative paint we put on last year, so guess whose job it was to scrub the bottom? And then I made the mistake of complaining about the way the paint was put on last year, so there was another job I had. Someone remind me to keep my mouth shut!! While it was a lot of work, I'd rather suffer from heat exhaustion (it was 95 degrees and I had coveralls on) than
climb down into the bilge like Dennis had to. One of 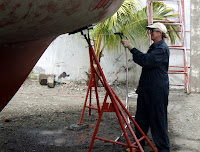 the yard guys came over to the boat and said he'd dig a hole to drop the rudder for 100 B's. At the exchange rate right now,that's about $25 US. No problem, have at it! We did that back in Michigan, ourselves, and it took us 6 hours to dig through stone and crushed concrete. Pinto brought a friend, they did it in 2 hours and I doubled their money. Well worth it, since we were doing all of the other work ourselves.

eka Nova had said on the Net one morning that Patrick was a fantastic general contractor, so we contacted him. He was amazing (plus really good looking). We discovered that there was corrosion on the shaft when we pulled it and he had a new shaft made for us in a day! Arrived when he said he would, the mechanics showed up on time, did a great job, and Aquavi was a great yard to haul at. They couldn't get us back into the water on the day that we wanted, so they only charged us for one extra day in the yard, not the three extra that we were there. While we hate being on the hard, Aquavi is a beautiful place to be, with a fantastic pool to relax by in the afternoon. And, since it's a hotel as well, there's actually waiters that stop by to see if you'd like a drink. Okay, so life on the hard wasn't that bad!!


They put us back in the water on Tuesday, we went out in the bay to check that everything worked okay, and tied back up in our slip at Bahia Redonda at noon, with help from Freddie. Potter, who speaks English, has left for Panama, so I've really got to brush up on my Spanish to communicate with Freddie! Got out the hose and all the cleaning stuff and gave the boat a good scrubbing. Spent two hours doing that, and no sooner did I finish than one heck of a storm blew in. It was the outer bands from Omar (I think it was just a tropical storm at that point). So, wasn't that a waste of two hours. We had whitecaps in the marina and tons of wind and rain. Glad we got in and tied up when we did. Our friends on Infinity said they had 60 knots of wind in Spaanese Waters in Curacao. We didn't have that, but it was pretty windy.


So, here we are, back at Bahia Redonda, getting serious about provisioning. November 1st is our day to pull away from the dock! ~~~_/)~~~