The last week before we left the marina we were busy shopping and stowing everything away, doing inventory lists, getting last minute chores done. You know, it's always better to leave some things until the last minute for that extra bit of stress. We had another gourmet meal aboard Nereia, cooked by Jaime, and made promises to keep in touch and meet up with he and Dan again. Told them they could always follow us to Antigua instead of heading west.
Up the next morning, Saturday, November 1st, topping off the water tanks, putting away all the loose knickknacks, hitting the bi-monthly swap meet for the last time, and off we went (even though Jaime tried to hold on to the boat and hold us back!)

Had a great motor all the way to our favorite little anchorage in Mochima Park, tucked in and secluded in 15 feet of water. Relaxed, swam and had an early night. Up and on the way to Coche before 7 a.m. Had not a bad day of motoring and some good sailing. Unfortunately, one of the small fishing boats decided that he couldn't make it past our bow, so cut real close to the stern, as we were screaming at him that we had fishing lines out. Yep, all 3 lures gone. To say DW was a little upset would be putting it mildly. Needless to say, he didn't realize at the time that this was the least of his problems.
Anchored in Coche where we were the last time and Dennis did his normal check of all fluid levels and the bilge. Red in the bilge, but no diesel smell. So not a good thing. Transmission fluid. Not quite understanding that since I had no problems at the helm with forward and reverse. Poured the last of our fluid in, only to have it run right back out. So, so not a good thing! Dennis crawled down into the small spot that he has to work in and couldn't find any problems. Now, a decision had to be made. We could sail on the outside of the islands back to Bahia Redonda and get a tow in - but the availability of parts and service people to work on Yanmar motors isn't really there. Made the decision to stick with our original plan and sail to Antigua, where parts and services would be readily available and at least we speak the same language. We had checked the weather before we left the marina and the winds were supposed to be light and the wave height down for the week. If we left Tuesday, we should miss the squalls that were going to hit the northern Windwards and Leewards. I spent Monday baking, making potato salad, pasta salad and cooking chicken so that I didn't have too much to do below underway.
Thankfully, the boat beside us left first thing Tuesday morning, so that I didn't have to worry about running into him as we pulled the anchor under sail alone. I didn't sleep all night I was so stressed about that part. We had taken up the anchor once or twice under sail, but had the motor running 'just in case'. But, that was also 4 years ago, when we were travelling with Frank and Gretchen on Infinity, and we were trying to show them that we could be real sailors too. Well, really, I wasn't sure about us! Dennis is only allowed 3 screwups a day, and he used all 3 up in the first half hour. The plan was for him to raise the main, hoist the anchor, and he'd be back to help pull out the jib. I was down below closing ports and making sure everything was ready to go and I heard the anchor coming up. Okay, he's done this before. He's taking up the snubber, right? I go up, the main isn't up. I ask him what he's doing. As usual, he ignores me (or he just doesn't hear is more like it). I give hi

m another minute and walk up on deck and ask him what he thinks he's doing. He tells me to get back to the cockpit that the anchor is almost up. I inform him that he'd better drop it again - SINCE THE MAIN ISN'T UP! See, that's the difference between the two of us. Under stress, I get bitchy, he gets stupid! Then he didn't put a reef in, which is not a god thing as far as I'm concerned. I don't like being able to trail my hand in the water as we're sailing along. It also meant that I had to go below and put all of my clothes into garbage bags on the bed since there's a deck leak somewhere that drips down the starboard side, right into my clothes lockers. Oh, and if anyone tells you it's okay to cut the marker off Coche - DON'T! We did see 5'5" on the depth meter, I guess we were just over too much to hit the bottom!
It took us all day to get to the tip of Margarita. The first night is definitely the worst. We were both so stressed all day, neither one of us slept, so we were only doing a one to one and a half hour shift, and even that seemed long. We were also worried about power, not sure if we could run the diesel, so we ran no lights, no radio and hand steered all the way to Antigua. Let me tell you, that's a lot of work. The second day was better and we took turns napping all day and I

was able to take most of the night shift. We've discovered that Dennis does well up until about midnight. After that, he just can't stay awake, even if he's just gotten up. I can handle the midnight to 5 a.m. shift as long as I have the MP3 player or IPOD going. (Found out that rechargeable batteries do not last in the MP3 player, you need regular batteries) Day 3 really is the turning point and you start to feel better. It also helped that Dennis would rig up the solar shower in the cockpit every morning so that at least we felt human at one point during the day. There was nothing out there. Usually, when I'm on night watch, there's always a freighter crossing my bow. I think days 4 and 5 we finally saw some traffic. Day 6, around 4 a.m., I could see Monserrat and Nevis. Unfortunately, it took us until 7 p.m. that night to make it past Monserrat and Redonda Rock. Light winds and strong currents. We were becalmed, doing 0.5 knots, for a couple of hours a day for 3 days. Very frustrating. Sunday night we made the crossing between Monserrat and Antigua. The waves got choppy and came over the bow and sides, getting me soaked. Dennis had to take over his shift early and put his rain gear on. Of course, not one wave came over the bow after that, and I woke to him trying to get out of his rain gear, with little success. It's cooler up here and I had on fleece!
Day 7, I think we're almost there. After the morning weather on Channel 06, everyone switches back to Channel 68. I called, stating that we were a couple of hours out of English Harbour, and if there was anyone that could help us come in to anchor, since we were without a motor, we'd really appreciate it. Sun Sail Charters responded and told us to give them a call when we were 10 to 15 minutes out. We did, finally at 11 a.m., and Sylvan and Clive came out to meet us out by the reef. Dennis said he wasn't worried. He obviously has much more confidence in my abilities than I do! They were great. They towed us in, we dropped the anchor, and they backed us up to set. We said we'd buy them a beer, but they didn't want anything. I brought in cookies and wrote a thank you to them in the Compass (January's Reader's Forum).
Got everything straightened out, had lunch, then went in to check into Customs, Immigration and the Port Authority. We'd heard not good things about the authorities in Antigua, and were a little worried since our Zarpe from Venezuela said we were checking into Guadaloupe. Fortunately for us, we ran into great people. Everyone was amazingly friendly and helpful and welcomed us to their island. The Immigration officer thumbed through our passport and commented that we hadn't been here before . We said not in 20 years, so we'd like to stay as 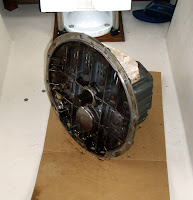 long as possible. He laughed and said, "Welcome to our island - enjoy!"

So, here we are, the transmission having been taken out, dead in the water, waiting for our parts to arrive, two weeks later. English Harbour is a wonderful place to 'be stuck', and we've done a lot of walking, hiking and bus trips over the island.
Stay tuned! ~~~_/)~~~
Posted by audreypaige at Tuesday, November 25, 2008