To Sapzurro and Back!

Finally left the Coco Banderos and marked our trail through the western reef, waving goodbye to Dick and Moira on Equinox, until we see them back in Shelter Bay. Oooh, scary, reefs all around, but amazingly deep water. Very light winds and no seas. Soujourn, a 37' Alberg, is a much lighter boat than ours, and was having a great sail. We were plodding along at a whoppi 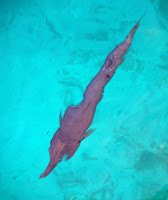 ng 3 miles an hour under sail, and by 1:30 were thoroughly bored, so we pulled into Ariadup while Sojourn continued on. Beautiful anchorage, clear water and had a refreshing swim, planning on stopping here on the way back to do some snorkelling and exploring. When we went to pull anchor the next morning there was a huge barracuda swimming lazily under the boat. Glad we didn't see him the night before!


We headed out of Ariadup early and motorsailed down to a small island just west of Ustupu, meeting up with Sojourn again. Swam over to their boat, getting our exercise for the day. The plan was to head out the next morning, but morning brought rain, thunder and lightning. Sojourn decided to leave, while we decided not to. Really don't like sailing while there's lightning out there, and we weren't in a rush. Plus, there was a huge waterspout out there! Disconnected all the electronics and stowed what we could in the oven, hoping to protect the computers and chart plotter in case of a lightning strike. Had a relaxing day, doing a few chores and reading.

The rain let u 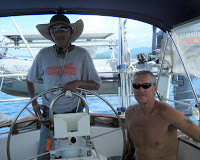 p and we had another motorsail down to an anchorage off of Caledonia, where Senor Castro paddled out as a representative from the island. He visited for awhile, asking us to take his photo, which we promised to print out and give him on our return. There was a $5 anchoring fee, but it was good for a month. He also had a list from the Congresso on what you were and weren't allowed to do in the area and on their island. It was informative and great, in that they asked you not to give cookies and sweets to the kids because it wasn't good for them.


Stayed overnight, with plans to stop on the way back. Another motorsail, anchoring in the bay in Sapzurro. The wind and rain came in shortly after we anchored -- way to test that anchor! Arranged for a launch over to Capurgano the next day to check in and check out of Columbia. Unfortunately, the power was out in Capurgano, and Immigration wasn't going to show up until 1 p.m. So .... there we were, bright and early at 9 a.m., trying to kill a few hours. It was challenging, since the town isn't that big. Thought about taking the waterfall hike, but none of us had dressed for it since we thought we weren't going to be there long. Maybe tomorrow? Found a restaurant to have lunch, finally got our paperwork done and took the launch back to Sapzurro. A misunderstanding on price ... with my poor Spanish, I understood $6 a person roundtrip. No, it was $6 a person, one way. So much for tomorrow's hike ... not at that price!

Then they came to 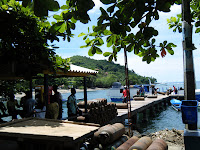 collect the $15 anchoring fee for Sapzurro. This gets a little old!! Decided that we weren't that interested in hiking the small waterfall (this is summer and the no-see-ums are horrible -- using lots of bug spray and mosquito coils), so left the next day and motorsailed back up to Caledonia.

The mode of transport in Capurgano and the town dock 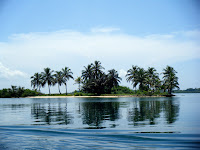 Did some dinghy touring, snorkelling, and toured the island with Senor Castro. Probably one of the cleanest Kuna villages we've seen. All the families live together in a walled off compound, but in their own huts. They also have a small hostel over the water. Quite nice and very primitive. Didn't take photos because on top of the $3 a person to walk on the island, they also wanted to charge for photos. I realize they need a way to make money, but I passed on photos.


The way back was motorsailing, but mostly motoring, with the main up just for stability. Pulled in behind Isla Pinos, where the pirates of old left their ships while they plundered the mainland. Lots of sea grass, which we don't anchor in well, but found a clear patch about two feet wide and an eighth of a mile long. Dropped the anchor in the sand in 9 feet of water. Well, I guess if we drag into shallow water it's just sand and grass!! The Silas (chief of the island) came by to 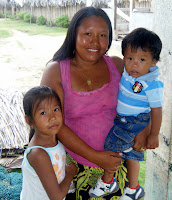 collect the $8 anchoring fee. I only had a $5 or a $20, so I gave him the $5 and he said he'd collect the balance when we went ashore the next day. Went exploring and met Senor Horatio. Sea Cycle and Equinox had told us how wonderful he was, giving them an island tour. Well, he was a wonderful man, but they've introduced generators and inverters to Pinos to run their radios and TV sets, and he was looking for someone to help with some problems they were having. Had a busy day repairing his cooler, taking photos and printing them out, and working on 3 or 4 electrical problems. It was interesting and enjoyable. The kids were adorable, all wanting their photos taken, and absolutely thrilled when we brought back the photo for them. Senor Horatio asked us to take a photo of his granddaughter and her children. Really, it is very primitive, and they would have no way to record the kids growing up! The only frustrating thing was that after all the work we did for the people of Isla Pinos, the Silas still wanted his extra 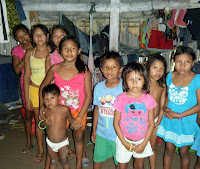 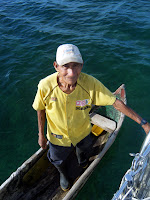 t understand that we were helping his people!!!! 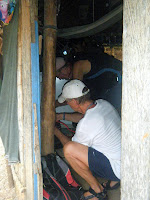 A couple of more stops and Sojourn headed back off to the Coco Banderos, while we stopped off in Nargana for some fruit and veg, and then off to Cambombia and the Mangles River to do laundry. ~~~_/)~~~
Posted by audreypaige at Wednesday, July 28, 2010