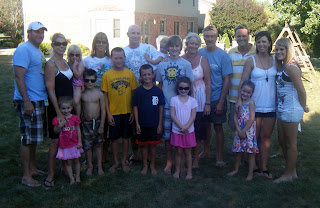 Busy, busy weekend. Shopped all day Thursday for our family weekend, then I headed off to Shaun's to spend the night and watch the girls on Friday. We did our usual, off to the park for an hour or so, and then fun stuff at home until Shaun got home from work. Back to Kelly's to prepare my stuff for Saturday, to find that Kelly (love her!) had already made up my brownie mixes! Really, such a little thing made a huge difference in my work that night!

Arranged for the bounce house with the slide again through Wacky Zone for our family weekend. It was supposed to be a pirate house, but they double booked and we ended up with a bigger bounce house with basketball hoops and punch bags for the same price. This time, everyone was able to make it, except for poor Chris, who has too few weekends off and is still trying to put up siding on the house. Dennis' friend, Jerry (his brother's friend from childhood) was able to make it, with his daughter and son-in-law, Amy and Dante, and their daughter and son. I'm terrible, I forget their names, but they were adorable. Amy's daughter was 6, as were our Avory and Mady, so the girls had a great time comparing notes and having fun. Nine grandkids stayed over, along with Parker's friend, Liam (Jake went home with MA). I suppose we could have done more with them the next day, but we were just too exhausted! The kids did get to play in the bounce house again, since they didn't pick it up till around 2 in the afternoon. Dennis took Cody and Zach out to get White Castle, and brought some back for Kelly and Taylour. Charlie was smart enough to head out at 7 in the morning to go golfing.

Grandpa with Avory, Ryenn and Emmy ... Char, Kelly, MA, Taylour, Tania and Rich. ... Amy in charge of lunch with the little ones 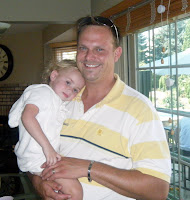 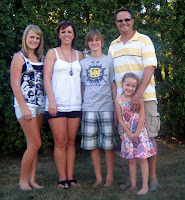 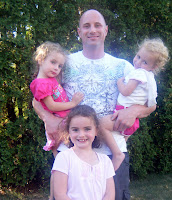 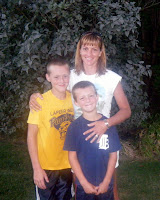 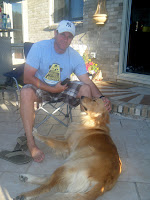 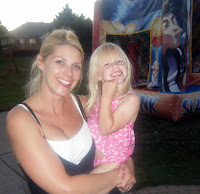 Ma, Zach and Jake ... Char and Apollo ... Kelly and Brooklyn
It's so great to have everyone together!!!!

Where has the time gone? Dennis had hoped to take Cody and Zach out to the gun range for some shooting, but just ran out of time. Took Taylour, Cody and Maddy home to Windsor on Monday; haircuts, last minute shopping and packing Tuesday; dropped off the rental car Wednesday, and Kelly took us out to the airport hotel; back to Panama Thursday. 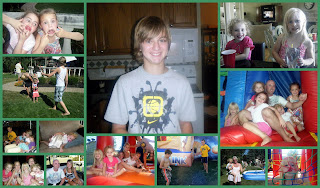 Where did those five weeks go?
Posted by audreypaige at Friday, September 17, 2010