Left Cabo de la Vela around 10 in the morning for the 130 plus miles to 5 Bays. About a half an hour out of the anchorage we caught a 40" Wahoo. What a good start to the day. Nine meals out of that fish! Part of the day and night was sailing, but the majority was motorsailing. That's okay, we have diesel. We've heard the horror stories of 25-35 knot winds and 10-12' seas, so we'll take small seas and little wind again. 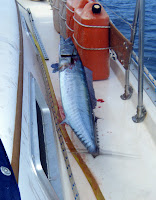 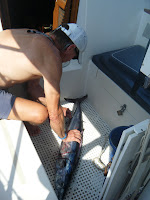 Later in the afternoon, while Coqui, Equinox and Evening Star were ahead of us, we heard a call from Mr. Sam, the escort vessel for the gss Atlantic, a siesmic survey vessel. He was giving his co-ordinates, calling the two sailboats that he could see. We looked around, couldn't see anything, so Dennis didn't pay attention. Luckily, Mark on Sea Cycle was and realized that he was calling the two of us. We did see him after a few minutes, and while he recognized that we were all under sail and had right-of-way, they were a survey vessel needing a 6 nautical mile clearance port, starboard and stern. We ended up having to start the motor to make sure we were out of their way.

We were so hoping to see the snow covered mountains of the Santa Marta Range, but it was too hazy. About an hour out of the 5 Bays anchorage we hooked another Wahoo, 39" this time. That was an eight meal fish. Yes, we shared with the other boats that were on the way with us - Sea Cycle, Equinox, Evening Star, Coqui and Quest.

Pulled into the anchorage in Bahia Guayraca (the third bay out of five) around 2 p.m. It was so hot, I didn't care what the water was like or how cold it was, I needed to get in. It was so cool and refreshing we decided to clean the waterline. Halfway around the boat we started getting stung by little jellyfish. Time to come out! Since we had the dinghy in the water, we brought fish packages around to the other boats, but we were too tired to haul the bbq out to cook ours, so it was hot dogs and veggies and bed by 7 p.m. 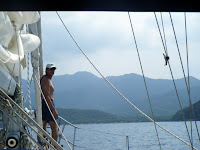 
Planned to go exploring the next day, but ended up doing boat chores. Dennis hauled out the sewing machine to fix the mast cover and trim the new shower curtain. I was giving the head (bathroom) a thorough cleaning and decided it was time to retire the old shower curtain. One minute it looks okay, the next minute, yuk, where did that mold come from? Then we did taxi service again to do happy hour on Evening Star. It's only a 15 mile trip around the corner to Rodadaro the next day, so that should be an easy day. ~~_/)~~

Posted by audreypaige at Monday, December 28, 2009

We are so jealous!! Wahoo is my favorite fish and we have never caught even one. And you catch 2 large ones in one day. Enjoy!!