Up early in the morning and I called Chris Parker - needing a relay again! Frustrating. Sounded like good weather, as long as we made it in to Cartagena before Tuesday, the 29th. Underway before 10 in the morning and actually had a pleasant sail for part of the way to Rodadaro, and then motoring into the anchorage. Very, very busy resort town. Lewis on Coqui was already anchored, so we didn't have to worry about him. Anchored in about 20 feet of water, relaxed and started to get lunch ready.

The Columbian Coast Guard came to visit. Mark and Deb were outside of the anchorage area, doing circles, trying to calibrate their windvane/autopilot. Coast Guard called them three times to find out what they were doing, until they finally gave up and anchored. Then the Coast Guard came into the anchorage and decided we were all too close to shore, so pick up and anchor in 40 feet instead of 20! Ourselves and Sea Cycle have a manual windlass, and Equinox and Evening Star have both had their electric windlass' quit. Isn't this going to be challenging when we pick up!

Moira on Equinox called all of us - they've always had a Christmas brunch, and she wanted to continue that tradition on the boat. Sea Cycle thought they might head out Christmas Day, but the rest of us said we were staying and would love to get together. We watched Sea Cycle leave at 8 a.m. Christmas morning, but the rest of us headed over to Equinox for brunch. What a great time! Moira was really, really busy! She made a great fritata, apple crisp, a cranberry loaf, and a couple of other things I forget now, since there was so much food. There were deviled eggs, shrimp cocktail, rum cake and, oh yes, Moira's blueberry muffins. (I'm waiting for Moira to send me their Xmas photo)

Back to the boat to digest the food, and then we picked up Dick and Moira to head into the beach. We were able to pick up an intermittent internet signal in the anchorage, enough to pick up email and call the kids, so we were happy. Dennis built our long range wifi antenna, and so far it's worked great. Dick and Moira took their computer into shore and while they sat in the hotel doing their email, we walked the beach. Wow, Christmas Day in 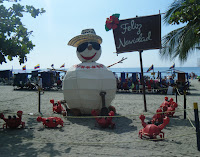 Rodadaro is packed! Checked out all the little back

Who knew there were
crabs involved in Xmas?

Tourist bus outside the hotel. 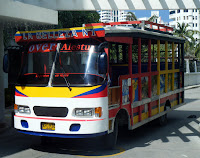 Back to the boat and everything packed away, ready to leave at 2 a.m. for the trip to Punta Hermossa. ~~_/)~~

Posted by audreypaige at Wednesday, December 30, 2009