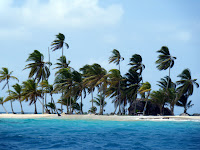 Sitting in the anchorage at the Lemmon Cays we got a call from Infinity on the VHF - they were on their way to join us. So good to see Frank, Gretchen and the best boat dog, Loki again after two years. They left us in Bonaire in 2008 to head to Curacao, while we headed back to Venezuela. A visit on their boat in the afternoon and then they came over for dinner. Way too much wine consumed that night but we still managed to go snorkel 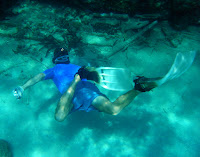 ling twice the next day. There must have been a cruise ship in because the island with the wreck you can snorkel on was packed with people. There had to have been over a hundred there! Way too crowded! The outer reef in the afternoon was a good snorkel. Saw a small lobster, and by the time Dennis decided he would take it, it had disappeared. Good exercise anyway.

A sad goodbye to Dan and Jaime on Nereia and Harry and Elaine on Zydeco. Nereia is heading back to Florida to sell the boat and be land based, while Zydeco is heading to the Chesapeake to do a refit to head to the South Pacific. Dan still wants to sail so told us he'd crew for us anytime. If we ever decide to leave here (and that's undecided), we'll take him up on that. We promised Nereia we'd visit in Ecuador, because I'm not going back to Florida unless it's to be with the grandkids at Disney.

Might apply for the pension visa in Panama so that we don't have to check in and out every 90 days. It might be worth our while if we decide to stay for a year, or two, or ten! The sailing is great here because while we get the wind, we're behind the reef so the seas aren't bad. A perfect sail the other day when we headed to the Coco Bandero 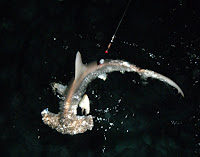 s, but more on that later.


DON'T SWIM AT NIGHT! Dennis put a fish head on the line one night (I really 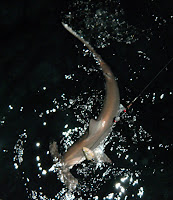 hate when he does that, but it makes him happy), and while we were relaxing and enjoying dinner, something hit the line. He was hoping for a huge snapper, but it turned out to be about a five foot hammerhead shark. EEEK! I'd never seen one before, and really don't want to see one again. I make sure I'm out of the water by 5 p.m. because, you know, they have watches and stuff and know what time it is, and I'm sure they don't bite before that time!!!! Dennis has had luck with fishing from the dinghy and caught quite a few small snapper and one cero mackeral, which was really, really good. He'd never kept the cero mackeral before, but now we will.

Posted by audreypaige at Saturday, February 06, 2010

Hi guys, I found your blog by coincidence..
I used to be on a yacht with my husband, the captain...we did all the pacific coast..now I am back in Panama where I was born..I just wanted to say hi and if you need any help or information when you arrive here I will be more than happy to volunteer.
patpanama@gmail.com
patricia kraemer