Bequia to Union and back to Bequia again 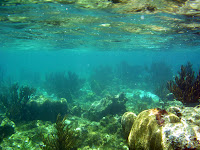 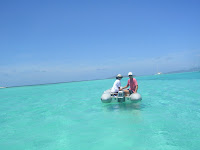 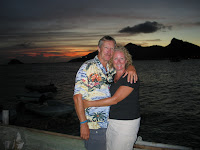 Left Bequia around 8 a.m. and had a great sail down to Union, even if we did get wet once or twice from a couple of squalls that came through. Everyone told us what a great anchorage Frigate Rock was, but when we pulled in the winds were coming from the wrong direction and we rolled all night. Picked up anchor the next day and motored up to the anchorage in Clifton where we were protected from roll by the reef in front of us. Kyeta's company, Kelly and Glen, arrived in Union and Dennis took our dinghy over to help transport them and luggage to the boat. We had dinner and then went over to visit on Kyeta since Kelly and Glen had brought all of us goodies from home!
Spent two days at Clifton, walking around town and snorkelling. Went to Happy Island for drinks and then out for dinner to celebrate Dennis' birthday. Dennis got an email from our daughter-in-law, Kristine, that our granddaughter, Avory, had colored a picture for him for his birthday. For her birthday, she was wondering if grandpa would get her a shell necklace and a mermaid with purple hair and a purple tail. Kristine had to tell her that if grandpa could pluck mermaids from the sea, we'd never see him again. Isn't that the truth!
Left Union and had a short but great sail to Mayreau. We had planned on anchoring in Saline Bay but the roll was so bad that even the catamerans were rolling about. We looked at the chart and decided to try the anchorage called Windward Bay. I was a little nervous with all the reefs around, but you could see them quite well, even with the choppy water. The reefs broke up the waves and it turned out to be a great anchorage. We snorkelled and I have never seen so many starfish! I need to get an underwater camera!!! We walked into town and had drinks and a light lunch. It rained all afternoon so we just relaxed on the boat.
Tuesday morning, after the sun was high, we picked up anchor and left for the Tobago Cays to do some more snorkelling. Lots of reefs, but coming in the south entrance was easier than the north entrance. It was overcast and rainy off and on, so we decided to head to the beach and play dominoes. Well, then it rained too hard to even play dominoes under the trees, so we headed over to Kyeta for dinner and to finish the game. Wednesday was a much nicer day so we got some snorkelling and exploring in, and then had pizza with a dominoes game on Audrey Paige.
Thursday morning, again, after the sun was high (so you can see the reefs) we picked up anchor and sailed to Canuoan. Dennis and I walked around and climbed what has to have been the steepest hill we've climbed yet. You could see the windward side of Canuoan and it was beautiful. If you were brave, on a calm day, you could get in that anchorage. I'm not quite that brave! Dennis' back went out so we took our time leaving Canuoan to head back to Bequia. We had wind against waves and ended up with some 7 footers over the bow and found some leaks on the boat we didn't know we had. Just off Mustique the water calmed down some and we caught a blackfin tuna. Luckily, we brought it in quickly.
It was the start of the Easter Regatta in Bequia and as we came around Isle a Quatre we saw all these sailboats heading right for us. We were on a starboard tack and had right-of-way, but I don't think they cared. Especially the 70 foot Santa Cruz that was heeled over so far we could see his keel. Luckily, we all avoided each other and we anchored at Petit Nevis, which is the old whaling station on Bequia, and snorkelled and walked around the island. Picked up the anchor around 2 and headed into Admiralty Bay where we got things ready for tuna dinner on Audrey Paige. We have to change this, 'whoever catches the fish does dinner' thing! ~~~/_)~~~
Posted by audreypaige at Thursday, May 03, 2007