Les Saintes to Dominica and Martinique 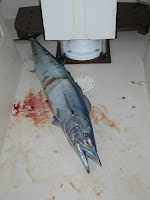 We ended up leaving Pain de Sucre on Sunday morning to head to Dominica. Had a reef and the stay sail up and it was still pretty rough at first. At least heading through the cut of the islands! Had a pretty good sail and dropped anchor in Canefield, Dominica mid-afternoon. It's a pretty secluded anchorage just north of the capital of Rosseau, but it was a Sunday and the beach was busy. Kyeta pulled in about an hour behind us. While I was down below getting lunch, about eight young lads, ages eight to twelve, swam up to the boat. At first they all decided to just hang on the anchor line. Ann from Kyeta called to ask if I knew this - yes, I could actually feel the boat bobbing with them hanging on the line. The next thing we knew there were little fingers all along the side of the boat wanting to come on board. They were extremely persistant. Finally, Dennis tried to explain to them about the yellow flag. Normally, in the real world, this means we are just stopping by and we're quarantined, not going to shore. They didn't understand that, so he thought he'd expand a little. Told them what the yellow quarantine flag really meant was that his wife was extremely ill, no one could come aboard, she had a full blown case of AIDS. Hey, thanks for that! But, they all talked between themselves and we didn't see them again!!!
Did get off the boat to row over to Kyeta to have dinner.
Up the next morning and underway before 6 a.m. We'd listened to weather on Saturday, and everything sounded good. This was Monday morning, and there is no weather on Sunday, so we were still relying on all of Saturday's forecasts. It was dead calm when we left the anchorage just before six. Put the main sail up at anchorage and Dennis put the fishing poles out before we'd even left the anchorage. Amazingly, we hooked a 4 ft. wahoo before Kyeta even had their main sail up! Headed down the coast while Dennis cleaned the fish and we tried to find room in our fridge/freezer for it. Had another hit about half an hour later that seemed to be an even bigger wahoo. Luckily (I'm saying) it got off.
As we got down to the tip of the island the waves and winds seemed to build. So not what was called for in the weather forecast for the weekend. By the time we hit the tip of the island and got a mile offshore, we had consistent 20-25 knot winds with gusts to 35 and pretty steady seas at 8-12 feet. It was not a good time. Denny and Ann on Kyeta tow their dinghy on a reverse dinghy lift. It was filling up with water and he was pretty concerned. He called us on the radio and asked if we'd consider turning back. Doing something like that had never crossed Dennis' mind, but he turned around before Kyeta did.
We ended up at Canefield for another two days waiting for weather, but got a ton of boat chores done since we couldn't go to shore. Did enjoy that wahoo with Kyeta. Ended up with about twelve meals out of one fish!
Finally left Dominica and sailed to Martinique. Kind of lumpy but we made it into Grande Anse D'Arlet in 10 hours. Probably would have made it sooner if Dennis had been paying attention to the GPS. I guess I left him at the helm too long and he saw a pretty beach and didn't pay attention to the GPS. I called Kyeta to ask their co-ordinates and wondered where they were going. We seemed to be going to the same place, yet we weren't. Then I got behind the helm and discovered that Dennis wasn't paying attention at all to where we were going! I'm always the one that takes us in and out of anchorages, and I guess I need to keep doing that!!!
Had a real calm night in Grande Anse D'Arlet and headed out early the next morning to head to Marin to do laundry (which we haven't done in a month) and groceries. It's Ann's birthday (Kyeta), so we definitely want to get into town to celebrate. Infinity finally caught up as well! We pulled in early, since we sincerely believe in motoring, checked in and picked up forms for Kyeta. They ended up having major motor problems and having to sail the whole way in. Infinity pulled in about an hour after them and we all got together for dinner that night to celebrate Ann's birthday and all the birthdays we've missed!
Next log coming soon! ~~~~_/)~~~~~~
Posted by audreypaige at Friday, April 27, 2007 No comments: 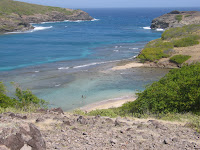 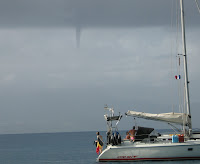 Greetings all - Sorry to have been so lazy in catching up with the blog. We picked up anchor off of Pain de Sucre and headed out through the cut to get a better angle up to Isle de Cochon in Guadaloupe. One thing about being in the Saintes - the weather is always bizarre. I have never seen so many waterspouts, daily, in my life!! Had a great sail up to Guadaloupe - all three sails up and no reef for a change - and missed all the squalls we saw either ahead of us or behind us. Sometimes, life is good!!
Anchored off of Isle de Cochon (Pig Island). Tucked in close so we didn't get any roll from passing boats, but in the middle of the night we got a little close to the boat next to us, so first thing in the morning, we re-anchored and then had a great spot for a week. There was a French boat anchored close to us with five little ones under the age of eight, and she was pregnant. Some women are amazing! These kids were like little fish and we loved watching them every day. Plop, plop, plop, swim around the boat, chase their parents around, plop, plop again!
Took the dinghy up the river a bit to see what that was like, and then visited the town of Pointe A Pitre. A great market, quaint shops, and we enjoyed ourselves walking around. However, it wasn't the marine warehouse Doyle's book said it would be. We've been looking for the styrofoam snorkelling floats and finally found them. They'd obviously been there forever (I worked at West Marine, I know what old stock looks like, especially when bugs and garbage come out when you shake it out!), but they wouldn't come down on the price of 28 Euros. That would be about 35 US. Guess they didn't want the sale that bad since they wouldn't bargain!
Took the dinghy up through the marinas and then went to the mall with the super grocery store. Glad we thought to bring not only the freezer bag but the cart with wheels as well!
Left Isle de Cochon and headed over to Isle de Gosier. Explored with Kyeta and Conch'd Out and then left the next day to head back to the Saintes. Heard Infinity on the radio. They're close!
Again, a great sail back to Pain de Sucre to hang out until we were ready to leave on Saturday.
Till next blog, which will follow ~~~~~_/)~~~~~~

Posted by audreypaige at Friday, April 27, 2007 No comments: