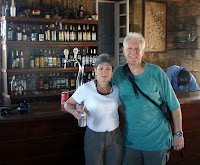 There we were, sitting outside Nelson's Dockyard, waiting for Rick and Eileen to arrive. We didn't want to miss them, so made sure we were there nice and early. Brave on all our parts. We've known and loved Rick for years, but have never met Eileen. They were both wonderful - but next time they're going to bring less luggage!!! Well, they did bring really important stuff, like our mail, a new battery charger (DW fried the second one) and other good stuff.

Had a great couple of days anchored in English Harbour, walking over to Falmouth Harbour and 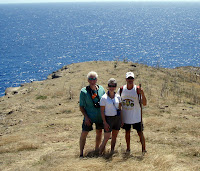 checking out all the mega yachts (the Maltese Falcon was still at dock) and then hiking up to Shirley Heights to watch the first RYOC race from English Harbour in Antigua, up to St. Martin, back down to Guadaloupe, finishing off in Falmouth Harbour. After the hike up and back down (down was a better view and a more challenging hike), we decided to head over to Green Island. All I have to say is - ignorance is bliss. It was probably the worst seas we've headed into since we've been out. I was absolutely petrified (read, really, really unhappy and bitchy) in the 12' seas we were rolling into, and then when we turned sideways to the seas, that was the end of me. Rick was feeling a little queasy, but Eileen thought this was great fun! I never wanted to leave the calm anchorage. Only spent a day and a half at the reef by Green Island, since Rick and Eileen were only here for a week. The sail back down the south coast, past English and Falmouth, on the way to Jolly was downwind, and the rollers were down to abo 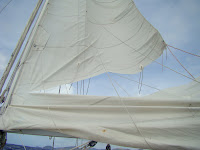 ut 8'. We do downwind sailing with just the main up with one reef. It was rolly and gusty that day, and on 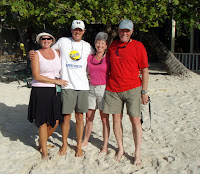 e big gust later, our 22 year old main was in shreds. Ripped from front to back. Another thing so not in the budget. Motored the rest of the way into the anchorage at Jolly Beach, took the dink to shore and did a beach walk. On Friday, we took the bus into St. John's so they could enjoy the town, and then another bus over to Dickenson Beach to hook up with John and Brigitte from Mystic, our next company! We needed to touch base on where we were to meet up with them.

Rick and Eileen were great - we know other boaters who couldn't conserve water the way that they did, adapt the way they did and were really good sports about everything. Dropped them off at Jolly Harbour for the taxi to the airport at noon on Saturday, cleaned, had laundry done, and picked up John and Brigitte at 11 a.m. on Monday.
Picked up wine and stuff for dinner on Monday and waited for John and Brigitte 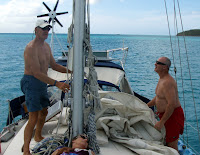 to arrive. Did groceries and provisioned Tuesday morning and headed over to the anchorage at Five Islands, where we discovered the guys weren't real great at the hat overboard drill. Wow, what happens if it's us? The good thing was that Dennis and John put their brains together and discovered that we could cut the sail down to a double reef and still use it. (That's Brigitte 'relaxing' while the guys figure the sail out). We needed to check out of Antigua to renew our time here without paying $150 US to do it, so decided to head to Montserrat. A very short weather window! Had a wonderful sail over there and anchored in Rendevous Bay. Checked in, got our Shamrock stamp from Immigration, and back to the boat to swim. The night started out okay, but got more and more rolly as the night went on. Brigitte said she was willing to give up the island tour if we wanted to leave, but we'd been on the tour 3 years before and really wanted them to see the island. Did the tour, which was great, especially since we got to see an eruption

. Back to the boat, and talk about working as a team!! Motor off the dinghy, dinghy lifted, lunch made, everything stowed and locked down - underway in 25 minutes! Started off as a wonderful sail ... then there was that current thing ... oh, and weather. Only 2 rainsuits so Brigitte and I were 'stuck' below, with fans blowing on us, reading and passing drinks and snacks up to the guys. Into Jolly Harbour about 8 p.m. and had a hard time anchoring. Gave up and took out the docklines and pulled into the Customs Dock. Best idea we'd had! 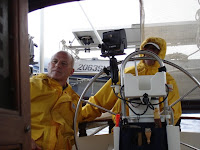 Checked into Customs, Immigration and Port Authority the next morning and then headed down to English Harbour. Took another dock walk, and the Maltese Falcon was still there, so the guys took our photo next to this amazing ship. They actually have a small submarine onboard! We went up to Shirley Heights and then headed to Green Island again. A much, much better trip than the 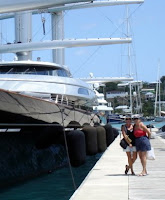 last time. Thank God! Spent 2 days and watched a wonderful full moon come up. Phil and Melanie on Samji invited us for happy hour, but we decided it was easier for 2 to get wet than 4 to get wet, so they visited us instead.

Up to Jolly Harbour, and a couple of beach walks later, it was time for John and Brigitte to leave. Where did that 2 weeks go? Motored up to Dickenson Beach to drop them off at their hotel, the Ciboney. What a quaint, clean place with wonderful, friendly staff. We anchored and had to put a bridle on for the first time in a year so that we pointed into the waves instead of riding sideways. John and Brigitte took us out for dinner that night at The Beaches, and then we were up and on our way back to Jolly by 7 a.m. the next morning. A day to relax and clean, and then took the bus into St. John's and then over to Dickenson to have lunch before they left. Loved all of our company, and miss them, but it is nice to have the boat back to ourselves! ~~~_/)~~~

Posted by audreypaige at Saturday, April 04, 2009 No comments: