Well, after making our way to Curacao, 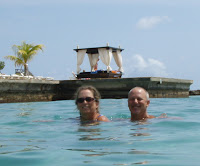 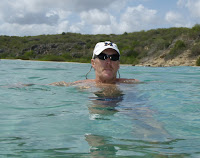 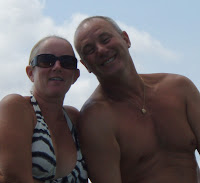 Went up to Santa Cruz for the weekend and had a great time, as you can see. 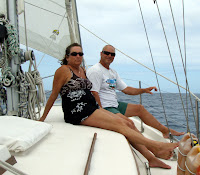 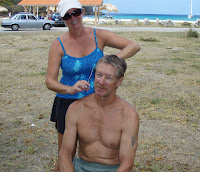 Then there were those rain showers. Not everyone has to get wet!!

Hooked a marlin underway. We think it was 90 to 110 pounds. Sure makes a difference with more than 2 people on board with sails, getting the fish in, a successful catch and release and, most importantly, photos! 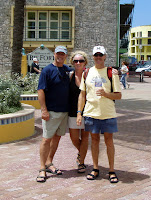 red Willemstead. What a great town.


So, those were the photos, and now the journal. We were so excited about John and Brigitte visiting. Hadn't seen them since we left them in the Bahamas in January, 2006. We had spent the season of 2004/2005 with them down the ICW and the Bahamas, and they helped us out so much when we were hit by Wilma in 2005 in Indiantown.
They were as much fun on the boat as they were to travel with. Way too much alcohol consumed and laughs and laughs. No one tells a joke like Brigitte. Get her to do a bat imitation! Amazingly, those seven days went by real fast. Think we have them talked into two weeks in Venezuela in November!!
The only frustrating part of the whole week was trying to rent a car. Had everything planned to pick the car up at 9 a.m. Wednesday till Friday morning. Tour the island Wednesday, drop them off at the airport Thursday at noon, do heavy provisioning and then be ready to go. Took all of our stuff into Sarifundy's to pick up the car at 9 a.m. Brigitte and I went back to the boat at 9:30 to call. Oops, sorry, no car available, see you at noon with a jeep. Finally showed up at 12:15 with a totally unacceptable vehicle. Many phone calls and ready to blow a gasket later, we booked at car with Budget at Jan Thiel Beach. Wonderful! Clean, safe, comfortable car. Toured the neighborhood that night, up early the next morning, packed luggage in the trunk and did a '3 hour tour'! Considering the short time we had, we did a pretty good tour of the island, dropped John and Brigitte off at the airport at noon, did our provisioning, dropped the car off and back to the boat and collapsed. Considering there were four people on board for a week, there was amazingly little to clean!
Starting to do laundry and provision and ready to leave for Venezuela on the next weather window. ~~~_/)~~~
Posted by audreypaige at Friday, March 14, 2008 No comments: 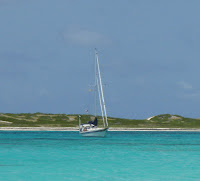