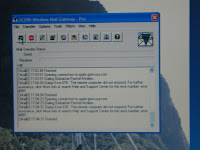 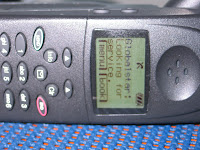 I have to say, the most frustrating thing I do all day is try to communicate. I don't remember this much of a problem last year, but everyone with the Globalstar phone seems to be having the same problem with receiving and maintaining a signal. Globalstar was kind enough to double our minutes this year, but that doesn't really help if you can't get a signal to last long enough to have a conversation! It's a miracle when we get a signal long enough to send and receive emails, and then if there's a long email in there, well, that will take two or three times to download everything.
For anyone setting out cruising, I really don't know what to tell you. What you really want is the ability to send and receive email in remote places, not where you have easy access to internet. We've tried Pocketmail, and that's good for travelling back and forth from the States to the Bahamas, but that's about it in our opinion. We thought, after spending all this money for a phone, data cable to have the ability to do emails and the yearly fee, we'd be all set. Turns out we're wrong! On top of that, Globalstar's Accounting Department leaves a lot to be desired. They're quite good at charging your charge card for roaming, where you've never been - I was told the one time I must have picked up a Peruvian satellite - ????? - long distance where you've never called, and just a charge because they messed up. Oh, they forgot that I paid that yearly fee and started charging me for my minutes used. That wouldn't be bad if they gave you a credit right away, but that never happens until you've sent nasty emails a month later to a supervisor. What a way to run a business!! The best was when I first purchased the phone and couldn't get it to initialize. After many, many conversations with people who answered the phone and tech support, they told me to send the phone back and they would take care of it. No phone ever went out without the ability to initialize and I must be doing something wrong. Three days later I received a brand new phone because they couldn't get the phone to initialize either!
We'll have to figure out something by the time we head west next year because then we will be roaming with Globalstar. If anyone has any suggestions (aside from through SSB), let us know! Ocens, as an email carrier is wonderful, but it's just trying to connect.~~~~_/)~~~
Posted by audreypaige at Tuesday, March 20, 2007 No comments:

To Dominica and Les Saintes 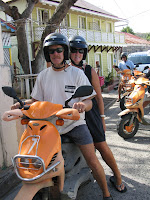 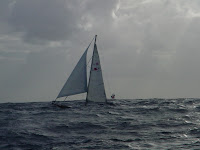 Well, we had quite the run from St. Pierre to Dominica. The waves were a little higher than forcast! Woke up around 4 a.m. with the boat rolling around and the sound of rain. Had been hoping to leave early because of the full moon, but with the rain were also clouds covering the full moon. We wanted some light, since there are fish traps all over the place, so we decided to wait an hour. Finally got tired of rolling around so we got underway at 5:30 a.m., with Dennis on the deck looking for fish traps. Just missed one! We had a great sail up the coast of Martinique, and then when we rounded the tip of the island, the waves were more like eight to ten feet, with an occasional twelve thrown in, instead of the six that had been forcast. It was an interesting sail. (The photo is not of us sinking, but Conch'd Out got us between the waves) We were going anywhere from seven knots to a dead standstill during the 10 hours it took us to get to Portsmouth in Dominica. At least the waves calmed down once we hit the coast of Dominica. Pulled in, dropped the anchor, Dennis repaired the main sail while I washed the salt off the boat, made a quick dinner and went to bed!
Left the next morning after listening to Chris Parker, our weather guy, and sailed the 15 miles over to Les Saintes, off of Guadaloupe. A wonderful sail and much better than the day before! We were the last in, just after Break & Run, who had to stop to clean the mahi mahi that they caught. We had a bet going that whoever caught the largest fish got a bottle of wine from all the other boats. Needless to say, Al and Joan on Break & Run got wine!
The anchorage near the town is deep, was crowded and was rolly, so we made the decision to head back to one of the little coves to anchor. It was only a 5 minute dinghy ride and was so much nicer. Headed in, checked in, picked up some fresh produce, bread and wine, and went back to the boat to enjoy the rest of the afternoon. We rented scooters the next day to tour the island of Terre D'En Haut and I've never been so afraid. We've put thousands of miles on motorcycles, but this was quite the challenge. Dennis hardly had any room for his knees, and he was one of the shorter guys. Denny from Kyeta had his knees almost to his chest. The island is very hilly and in a couple of places we had to take turns getting a running start from the bottom of the hill! But, it was a lot of fun.~~~_/)~~~
Posted by audreypaige at Monday, March 12, 2007 No comments: 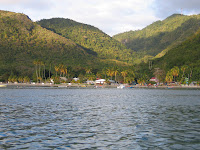 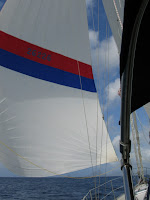 After Carnival was finished, Infinity and Conch'd Out left for St. Lucia. Infinity for company arriving, and Conch'd Out for a propane refill, which is not to be found on any French island. We took the boat into Marin, with Ann and Denny as passengers, to do laundry and stocking up on food and wine before we left St. Anne's. Rumor was there was supposed to be a favorable sail for using the spinnaker, so we cleaned out the back berth, dug it out and got it ready to go. Headed into the town of St. Anne's for some fresh vegetables and bread and then got underway to Grande Anse D'Arlet with Kyeta and Break & Run. Memory and Conch'd Out were on their way from St. Lucia. Had a fantastic sail with the spinnaker flying! Changed tacks twice and didn't mess things up too bad. We thought we did well considering this was only the third time we'd used the spinnaker, and the first time in two years.
Pulled into Grande Anse D'Arlet and spent a relaxing couple of days swimming, snorkelling and reading. Break & Run had caught a 45" wahoo and were kind enough to share it with us. So far this year Kyeta and Audrey Paige are fishless underway!
We left Grande Anse D'Arlet on Tuesday and pulled into Anse Mitan where we met up with Memory again and picked up the goodies they had brought us back from their visit to the States. Anse Mitan is a nice resort town with shops and restaurants everywhere. Dennis craved Chinese food, so we went out with Al and Joan on Break & Run and had a wonderful, but very expensive meal. The weather finally co-operated and we were able to check out and head to St. Pierre for the night before leaving for Dominica and Les Saintes.

Posted by audreypaige at Monday, March 12, 2007 No comments: 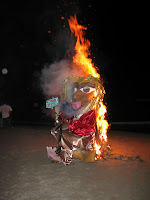 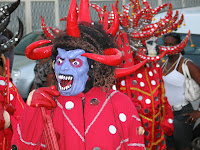 Well, we arrived back in St. Annes after a 4 hour sail, stopping by to say hi to Kyeta and then head into town to pick up the fresh fruit and veg that we missed in Petite D'Arlet. Casa Del Mar and Ticketoo pulled in just after us, and everyone got together to celebrate the first night of Carnival - the crowning of the Queen. One would normally think that would be a young beauty queen, but it was the older women, and they were wonderful. On Sunday morning Frank and Gretchen on Infinity decided that we needed a good hike to Salinas Bay in the southern tip of Martinique. We left at 10 a.m., hiked, swam, hiked, body surfed, hiked, ate, body surfed, hiked - you get the picture. Got back to the dock around 5:30 when the young kids were going to parade, but we headed back to the boat to collapse, while Infinity stayed in town. Monday came with clouds and rain - ALL DAY! It was the transvestite night, but we passed it up because we were tired. While we missed it that night, they continued for the next two nights, so didn't miss much!
Washed the boat in the rain and got a lot of boat chores done. Infinity decided that we should have dinner on their boat, so we brought over our Mexican Train domino game and I kicked everyone's butt!! Missed the parade, but had a great time! Went into town the next two days. Tuesday was red and white day, and Wednesday was black and white day - burn that devil! It was a small Carnival, but a lot of fun. Wish I could figure out how to post more pictures! The first photo (when it gets posted) will be of Denny and Ann on Kyeta, Tom and PJ on Conch'd Out, Frank and Gretchen on Infinity, Anna on Sashimi and, DW on Audrey Paige.
Loving the life!!!!!!!!!!!~/_)~

Posted by audreypaige at Friday, March 09, 2007 No comments: