We installed a new wind generator at the beginning of the summer, and it has made a huge difference.  Well, the amount of wind we've had lately does make it go all the time!  Since we don't have to motorsail to charge the batteries, we've sailed every time we've changed anchorages.  The sail from Nabadup to Green the other day was perfect.  If we could only arrange that -- 10-15 knots of wind, 1 foot waves -- for our sail back to the US.

The 15-25 knots of wind has finally calmed down and we're so happy to be able to snorkel again.  Dennis has caught a few small fish to pan fry, but nothing of size to bbq. 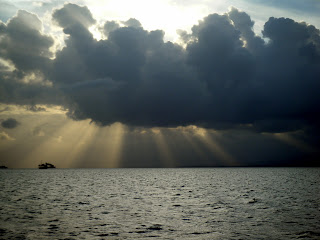 The rain has finally stopped, and that makes us happy to be able to snorkel, but it also means having to go down to Rio Azucar to get water.  It's relatively painless, just a slow process.  They now have a 'high speed' connection, which means the hose actually fills up.  Dennis filled up the jerry cans, then we put the hose below and  filled the tub, threw in soap and the laundry.  I swished everything around, scrubbed, and by the time he finished filling the tank, I had washed everything, emptied the tub, and we refilled for rinse water. A very productive day.  Plus, we were able to purchase gas at Rio Azucar (only $6 a gallon for all you people in the States who complain about gas prices), so we eliminated the need to go to Nargana.  Smoke from the fires and the generator running all night long make for not a nice anchorage.

Hanging out at Green Island for awhile, where we have good phone coverage and sometimes decent internet!

Okay, so I've had a few complaints and just looked at the date of my last post.  Guess it got away from me.  We're back in the San Blas, so there will be no photos added until we're back in the land of  real wifi, not a phone connection wifi.

Dennis finished his major sewing project of the dodger, bimini and side curtains.  I think that's the most frustrated I've ever seen him.  Well, maybe the motor mount job was up there.  He did an amazing job!  I know  I would never have the patience or skill to do what he did.

We spent our 24th wedding anniversary at The Dock Restaurant at Shelter Bay, enjoying a great night with Mark and Deb on Sea Cycle.  Spent our anniversary with them a couple of years ago in Aruba.  The food and company were wonderful!

Time to get ready to head out.  Took the bus into Panama City with Deb and Roger drove us around getting that all important provisioning done.  Paid a little bit more this year for wine and beer because we ordered it through the Dock Shoppe, just opened at Shelter Bay, but well worth the money.  Made life much easier. After  another run to the grocery store and finishing up the laundry, we were ready to leave on December 17th.  It's hard to cast off those dock lines and all the conveniences.

Had a good motorsail down to Portobelo.  Rained like I've not seen for awhile, so no one got off the boat on Sunday.  Monday looked like a good day to stage to Linton, but we were hoping to get Dennis' scuba tank refilled.  Well, with the holidays coming up, that didn't happen.  Left on Tuesday for Isla Grande, a nice 2 hour motorsail.  The winds and waves are supposed to pick up, so we'll be here for awhile, but it's a good place to be.  Nice resort place, we can swim and walk.  Plus, Sid and Manuela on Paradise are now renting a house in Linton, so we were able to catch up with them.  The best thing was that Manuela was going into Colon for groceries and took me with her for that last bit of fresh fruit and veggies.  While we did that, Dennis did a load of  laundry.  Thank you, thank you Sid and Manuela :)

Left on Thursday, the 29th of December for the San Blas.  The seas were supposed to be down to 4' by that time.  Yeah, right!  There were 8 to 10's out there easily, but luckily they were far apart and we were actually able to sail from the western edge of the Escribos Reef all the way into the East Lemmons.  Not a bad day.  Met Greg and Deb from Lion's Paw, Colorado, and spent some fun time with them.  Finally caught up with Frank and Gretchen on Infinity, which is always a good time.

Hung around the East Lemmons until after the new year, and then went into Porvenir to check in and have a better phone connection for wifi.  Cannot believe the number of boats on the reef in the last two years.  Lots of backpacker boats, but others as well.  Unbelievable.

We've had a lot of wind, and with this new wind generator, we have tons of power.  Have actually had some amazing sails since we haven't had to recharge the batteries with the engine.  Spent a couple of days in Salardup, then meeting up with Infinity again in Cambombia.  Gretchen borrowed Dennis' sewing machine and they discussed sewing projects, while Frank is trying to get rid of a bogus program I picked up which affected the running of my computer.

We're currently anchored in Esnasdup, waiting for the wind to die down so that we can snorkel, and hopefully avoid the huge croc that swims between here and Green Island.  Met  John and Gerry on Peking and Gary and Kaija on Kaija's Song and had a fun night with dinner aboard Peking.  Beautiful motorsailer.