Out of the water in Trinidad 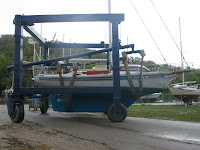 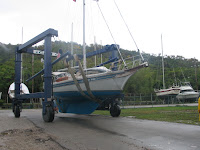 Well, here it is, June, 2007 and we're out of the water for the first time since December of 2005. The bottom didn't look too bad, considering we spent last summer here in the water, with Rodney, the diver, scraping the bottom every month. Since we haven't been off the boat since that time, getting everything cleaned and prepared was quite the challenge. Getting rid of a lot of extra 'stuff'!
We feel like we've done nothing but spend money since we pulled into the dock at Coral Cove, but it's all worthwhile in the long run. Finally bought the flexible perforated deck tiles to put behind the storage areas on the port and starboard side behind the setee cushions. I had some light matting, but still had our pop and beer hit some part of the fiberglass and puncture. Nothing like Diet Coke sprayed all over!
We've decided to add another solar panel next year (which we've already ordered) since we are both really against having a Honda generator. Nowhere to store it and we really don't like the noise. Walked down to the Dynamite Yard and found Dexter in a machine shop there. He was out the next day and had our new solar panel rack installed the same day. That's service! Getting new lifelines has been a challenge that we'll have to wait for in the fall. We had Riccardo from Coral Cove sand the bottom, raise the waterline and work on the little blisters that we have. Well worth the $200 for Dennis not to look like a smurf, full of blue bottom paint! The most exciting is, by the time we get back to Coral Cove in November, Audrey Paige should be freshly awlgripped. Light grey hull with a dark blue stripe. Can't wait.

So, here we are, out of the water, in the sling. We've been put into our summer storage place, jackstands in place with chains and boards underneath the stands. It's been an exhausting three days since we've been out of the water working ten hour days. Dennis is trying to get some things done so he has one or two less jobs when we get back, and I'm hoping all my cleaning and teak sealing means everything will be set to go in the fall, since I have all the outside wood and stainless to do!
We did have time to do a little fun stuff - arranged with Jesse James, from Maxi Taxi Service to take us to the movies on Tuesday night for the new Pirates movie. It was great to see Jesse and his wife Sharon Rose again and it felt like coming home!
Heading back to the States June 5th, with a taxi pickup at 4:30 a.m., renting a car and driving 7 hours to Mom Coon's house, looking for jobs to pay for all these extra little things. Stay tuned!! ~~~~/_)~~~~~
Posted by audreypaige at Monday, June 04, 2007 No comments:

Photos from Union Island to Trinidad

I've had a few issues posting photos to my last couple of blogs since I switched to Google, so I thought I'd do one with mostly photos. First off, we have Sharky from Union Island doing a Sunday night bbq, then the wonderful little children in the kindergarten and grade one class in Carriacou, with their teacher.

The next photo is Audrey Paige passing through the Bocas, with Kyeta sailing in ahead of us. We left at the same time and passed one another all night long. They sailed past us through the Bocas, but then we cheated and started the engine and beat them into the Customs dock. That actually worked out well, because then we were able to help them raft off to us so we could head into Customs and Immigration (after a much needed shower!) Kyeta called Coral Cove and headed into a slip while we backtracked and anchored in Scotland Bay.

That's the great shot of Sea Cycle anchored in Scotland Bay. We felt like we were in the land before time. Turned out to be a good decision to stay in Scotland Bay for 5 days since we got a lot done without the distractions of a pool, shopping and restaurants. It's taken us a long time, but we actually have mastered taking down the sails and folding them on deck!