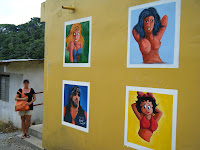 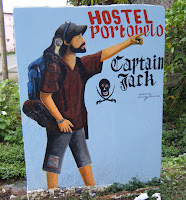 Well, it's been awhile, so time to get to another blog. As I said, pulled into Portabello in the rain, got a good hook and relaxed. When we were here in July there was a new youth hostel just getting started called Captain Jack. It's run by Jack and Dennis. They've done a great job. Painted the building, happy hour every night, wifi available, meals, laundry and trips into Colon and Panama City. All the prices are reasonable and they're making Portabello a place you want to be. On the weekends there's music and street vendors set up and the food you can buy is amazing! Bought the most delicious roasted chicken with plantains for $6. Enough for 2 meals! 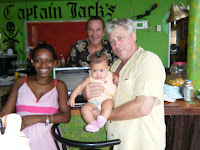 Jack in the back, with Dennis, his wife Negrita and baby Jacqueline

I finally got my new phone hooked up to the internet and it works fantastic. Well, it did until I decided to go with the shorter cord, put the phone in the same place, and watched it drop right on the internet connection and break off. So, fantastic for 2 days! Can't live without it now, so I was heading into Panama City by myself to meet up with Roger and pick up a new phone. Randy on High States came over in the dinghy and said that Lynn would go with me if I wanted. Ooooh, yes, a girls day out! Took the bus from Portabello to downtown Colon to pick up the Panama City bus, had coffee, wandered around Albrook Mall and then Roger picked us up to take us to Eldorado Mall where they have the store that sells the unlocked Nokia phones. He then dropped us back at Albrook Mall, where we wandered around the shops, had lunch, and then headed back. Had a great day! Got off the bus at Sabanitas to catch the bus back to Portabello and saved ourselves an hour by not heading all the way back to Colon. Randy was already up at Captain Jack's, so we called Dennis on the radio to meet us up there. Just after we got up there, the sky opened up. Dennis was a tad wet by the time he got there. Fantastic lightening display -- scary!

Lots of socializing done in Portabello. Went up for happy hour a few times, and then on a Sunday they have Mexican Train dominoes and a potluck. Well, neither Dennis or I have the attention span for an afternoon of dominoes, so we just went for the potluck.

The swell got kind of challenging at times in the anchorage. We were lucky to be tucked in enough to be out of the roll, but just getting into the dock was scary at times. Our last day there we couldn't tie up at the music school because of the swell (the water was over the dock), so headed into the town dock. Not really fond of that because if you lock up, you're locking up to a tire they can cut away. Just headed in to pick up some more wine, eggs, a case of beer for Infinity and some great french bread.

Back to the boat, prepared to leave. Quite the swell leaving and not real fun, but made it down to Isla Grande in a couple of hours. Tucked in, anchored, went for a swim and out the next morning for Chichime. ~~~_/)~~~

Posted by audreypaige at Monday, November 08, 2010 No comments: