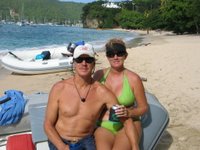 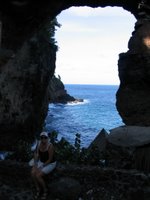 Greetings from Bequia, where we've had a wonderful time catching up with friends, new and old, during Christmas and New Year's. I've been having a few computer issues, so that's my excuse for not getting this blog out earlier.
We left Grenada with Kyeta and Vindomar and had a pretty good motorsail into Tyrell Bay in Carriacou, where we met up with Nereia, Columbine and Sea Cycle. Stayed an extra day so that we could get together and have lunch, but unfortunately didn't get to see Deb and Mark on Sea Cycle. Deb was sick and Mark was working real hard trying to get the boat ready to put back in the water. Needed to cool off after the afternoon in town, so we swam over to Nereia and visited with Dan and Jaime.
Left Tyrell Bay with Kyeta and headed up west of Union Island to be able to sail right into Canouan, while Vindomar headed into Union to meet up with Equinox, who finally made it out of Trinidad. Had a pretty good sail and pulled into Canouan in the early afternoon in time for a swim and what turned out to be a rolly anchorage. Kyeta came over for dinner only after the boat in front of them moved to a mooring ball after dragging down on them three times. Up the next morning and headed out around 6:30 a.m., just in time to get a downpour about half an hour out. Put the autopilot on and hid under the dodger and managed to stay pretty dry. That worked out well! Unfortunately, I didn't get my morning coffee and ended up with a headache, and by the time I went to take something for it, we had 6 foot seas and I spent the rest of the trip to Bequia hanging over the rail. That's the first time I've been sick since we bought the boat back in 2001. We pulled into Bequia around noon and I lay down for an hour so that Ann and I could head into town to check in. DW took good care of me the rest of the afternoon and I was back to normal (whatever that is) the next day.
It was like a Coral Cove reunion in Bequia and we all had a great time catching up. Went on a tour of Bequia with Elson and his nephew, and saw some new stuff that we missed on our last visit. Unfortunately, Moira from Equinox had some intestinal problems and ended up being admitted to the hospital in Bequia and then being transferred to St. Vincent. I guess that was quite the experience. The things we take for granted - like sheets, towels, hot water, toilet paper and a seat on the toilet! Thankfully she's back to normal now after being in the hospital for 5 days.
With so many people here it started to get way too complicated for Christmas dinner, so Ann (Kyeta) and I decided that we would just get together with PJ and Tom from Conch'd Out and do our own thing. Wish we had thought to take a photo of the great meal we all put together. Turkey dinner with all the good stuff that goes with it and enough for leftovers the next day!!
Headed down to the Tobago Cays with Kyeta and Conch'd Out on the 27th. This is still one of the most beautiful anchorages ever. Met up with Casa Del Mar and Ticketoo and spent a great few days visiting and snorkelling, with our last day having a beach potluck and a mean game of Mexican Train dominoes.
Left Tobago Cays New Year's Eve day and had another great sail into Bequia, just in time for our afternoon swim. Took finger food over to Just Two (Connie and Peter) and had a New Year's Eve with Memory (Rick and Carrie), Kyeta (Ann and Denny), Equinox (Moira and Dick), Vindomar (Roy and Sue), and then went back to our own boats in time for the fireworks at midnight. That was interesting! Had to stand on the deck with buckets of water while drunk cruisers shot off flares in a crowded anchorage!
We've just been hanging out in Bequia, which has turned out to be one of our favorite islands (except for the French islands with their inexpensive wine), and heading to the beach every afternoon for our two hours of treading water and exercising. Well, the women stay in the water while the guys hang out on shore. Something about the water being cold? Had one last potluck dinner on shore, since the weather was clearing and boats were heading both north and south. Vindomar and Just Two are heading south and west, and we don't know when we'll see them again!
Until next time~~~~/_)~~~~~
(photos will follow when we have internet)

Posted by audreypaige at Wednesday, January 10, 2007