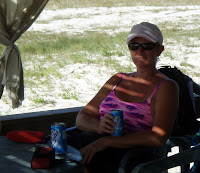 Pulled into Porlamar, close to shore, to get a good wifi connection. What slaves we have become to that! Took the bus into the store for the grocery run on Wednesday. Didn't need much, so went shopping in the home stores and mall area surrounding Sigo. Amazing prices. New headphones for skype cost a whopping $3 US.
Happy hour on Vindomar with Roy and Sue on Thursday night as they're heading out to Tortuga and beyond and we won't see them again by boat. For every hello there's a sad goodbye!
We ended up checking out of Margarita on Friday, leaving around 8 a.m. Saturday for Coche, an island about 15 miles off of Margarita. Dropped anchor just as Frank and Gretchen on Infinity and Alex and Marie on Friendly Rival arrived in a power boat to do their kite surfing. Beautiful beaches! Watched the kite surfers and ended up meeting a wonderful gentleman, Herbert, from Germany. Walked the beach on Sunday, just exploring and enjoying ourselves, and we met up with him again. He was staying at one of the all inclusive resorts, and when we said we had to go into town to get drinking water (last water we picked up was the first in 5 years we haven't been able to drink) he told us to meet him on the beach later and he would give us water from his hotel. Lunched in town where the local kids used our dinghy as their new play toy and then wanted money for watching it (that didn't happen) and then headed to the beach again. Met up with Herbert and we were introduced to his wife Krista, who spoke very little English. We ended up having a very enjoyable visit, and not only did he give us two bottles of water, but brought us beach drinks as well. The highlight of our Coche visit.
Got back to the boat and cleaned out the quarter berth to dig out the cruising spinnaker. Had a wonderful downwind sail from Coche to Cubagua. Wandering Albatross was the only boat in the anchorage, and they rowed over to say hello. We'd heard of each other through Infinity and Squiz, and so it was good to finally meet up.
We explored Cubagua, crossing across the salt flats and observing the village from the 1400's that the archeologists are rebuilding, then walking the water to the lighthouse and along the shore. Met a local family who insisted we take fish and then asked if we had medicine for stomach problems. Our Spanish isn't that great, so we took Mary Liz from Wandering Albatross back with us to see whether they needed Rolaids or Immodium. Rolaids it was!
Odyssey pulled in in the early afternoon, and we found out we were both planning to leave the next morning. They took the southern route to Chimina Grande and we took the northern route - neither one of us catching fish! Must say, this was the first anchorage we've pulled into that we were glad there was another cruising boat.
We finally talked to Nereia on the radio, kind of scratchy, but we were 15 miles out. Jaime and Dan on Nereia were wonderful! They arranged everything for us and we were so spoiled with not having to check spaces in the marina, who to call, where the slip was, etc. As we were motoring from Chimina Grande to Puerto La Cruz Jaime got on the radio and said, "I see you girl!", from the security tower, and it was so good to hear him! They grabbed our lines when we arrived and Jaime took me to check in with the marina and Immigration. Like I said, totally spoiled since he speaks the language!
We're now checked in and staying in the marina for 2 weeks - nope, it's now extended to 3! Old home week with the Trini boats from 2006. So good to seee everyone again! ~~_/)~~
Posted by audreypaige at Thursday, January 24, 2008