Well, it was another early morning leaving Barlovento for the sail to Los Roques. We definitely wanted to get in with good daylight and not end up like the ship on the reef!

It was a pretty good sail, just a very,

very long day. The wind, of course, was on the nose, so we did quite a bit of tacking, and that 35 miles was closer to 60. Dropped the anchor by the beach off West Cay where we'd been before. It was a bit rolly, but it was too late in the day to make our way through the reef to the protected anchorage off Cayo de Agua. Up early the next morning, with Dennis on the bow to guide us through the reef to the nice calm anchorage where we were the only ones there. Heavenly! Did some beach walking and snorkelling, and saw some of the largest fish ever. Time for a change after a couple of days, through the reef again and some nice shallow water (I hate that part) over to the anchorage off Becqeve, where we anchored in 9 feet of water. I feel like I'm back in the Bahamas. When we went snorkelling we saw what I say was at least a 6 foot nurse shark. Okay, I know they sleep during the day and normally don't eat swimmers, but I still freaked out. Made sure Dennis was on the shark side, and when he thought he was going through the cut in the reef first, I let him know that he wasn't.
Time to sail again, so we picked up the anchor and had a great sail from Becqeve over to Carenero, where they actually had mooring balls. Good thing since it was deep right in close to shore. We did drop the anchor the next day when we went for a walk, just to make sure the boat was still in the same place when we returned. We actually had bait fish jumping in the dinghy as we were driving along. Don't know if something larger was chasing them or it was the sound of the motor, but they were all over the place. Willy and Mary on Twilight (a huge old shrimp boat) and Chuck and Monica on Cherry Bowl (a very large trawler) were now in the anchorage. Chuck caught the largest barracuda we've ever seen and we all had dinner aboard Twilight that night. Mary served us wine, which was such a treat, since we ran out a week ago. They also gave us 25 gallons of water from their watermaker, which makes 50 gall

ons an hour. An even bigger treat!

Off again, motoring the 2 miles to Sarqui where the beaches, again, were beautiful and the snorkelling fantastic. And when you put a piece of chicken fat on a line at night, you might get lucky enough to catch this fellow, an 18 pound Snapper. I guess we won't starve with all this fish! Then off to Crasqui where the anchorage was starting to fill up with boats there for the holiday weekend. Gran Roque is close, and there's a rumor they have beer and wine, so we decide that we'll zip in and see what we can find.
Had the best sail on the way to Gran Roque, pulling in to see Jim and Norma on Mi Lady. Someone to share the snapper with! Rainbow Rider and Caribbean Soul pulled in shortly after. Lowered the dinghy, said a quick hello, picked up some beer, wine, bread and veggies, and off we went again. The main island is very, very busy with water taxis running back and forth between all the secluded little islands. 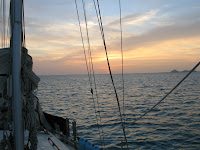 Found a beautiful anchorage at Soyoqui - a little reef in the middle of nowhere - with no one else around. Pure heaven. We were supposed to meet up with Dan and Jaime on Nereia, who had wine and beer for us, but they had engine problems and had to head back to the marina. The latest word is that everything is fixed and we'll meet them in Tortuga at the beginning of May. A couple of days snorkelling and relaxing, then through the reef and on the way to Tortuga. Los Roques is an absolutely beautiful place and we look forward to coming back here in the future, a little more well stocked. Also, we're not checked into Venezuela yet, so we do need to do that since we've been gone from Bonaire almost a month.
Next time, longer! ~~~_/)~~~