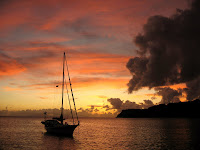 Well, it turned out the problem with the transmission wasn't too horrible. The lock nut had backed off, so the wonderful folks at MPS fixed that and replaced the seals. Almost wish they had found something bigger, just to put us more at ease. But, at only $350 US for the repairs, we're not complaining. It took a couple of weeks to get the parts in, but we used that time to explore English and Falmouth Harbours and take the bus into St. John's a couple of times. After more than two weeks, the transmission was back and installed on the boat. We had ordered new motor mounts at the same time, since we're pretty sure these are the originals. The chief mechanic came out with the motor mounts, had us start up, looked at the engine and told us we were fine. Talk about honest! That was about $600 in parts alone, not to mention labor. Vaughn was wonderful helping to put the transmission back in but, unfortunately, he lost his cell phone in our bilge. We retrieved it, but I don't think it will work again.

So, with our transmission now in and working we decided to pick up anchor and test the systems. We had met with Chris and Marsha on Endorphins and they told us that Indian Creek was a nice little anchorage, only a couple of miles away. Off we went to test everything and when all seemed to be working, we went and anchored in Indian Creek. Had to pass by Eric Clapton's little spread - not too shabby! Not a bad anchorage, but kind of buggy and with not real clear water. Spent a couple of days there and headed back to English Harbour to look at all the beautiful boats that were coming in for the charter boat show. Not for the likes of us to tour the insides, but even looking at them up close from the outside was amazing. Some people out there have a LOT more money than we do!

We finally left English Harbour and were planning on anchoring in Carlisle Bay and going out to the reef to snorkel. Kind of windy and choppy waves, so we passed on there and headed over to Jolly Harbour, home of Budget Marine. Once we pulled in and anchored we noticed that Metalia was there as well. We had met John and Marie in the work yard at Aquavit and they had given us all kinds of helpful tips on Antigua. It turned out Marie was back in Canada for the week, so we had John over for dinner and he pointed out the anchorages and problem areas - problem areas as far as the reef system goes! We tried to head north and made it to Deep Bay where the weather was not looking promising for heading farther north and cutting through the reef. So, back we went to Jolly Harbour where at least we could take the bus into town and visit three different beaches and had a wonderful dinner on Metalia. We went in and filled up with water this morning and pulled around to a little anchorage where we can steal internet, then we're off again tomorrow to attempt Boon's Pass and head into Jumby Bay.

I've posted another album, Venezuela to Antigua, on the Picasa Web Albums. That's sometimes easier than trying to download photos to the blog site.