We've been hanging out in Aruba and Dennis has been enjoying the fast food places. Baskin Robbins is still our favourite place to hang out and watch the cruise ship people. Looks like we'll be here a little longer than we thought originally. The weather, as it has been known to do, changes daily. There's quite a few of us hanging out in Curacao or Aruba waiting for that 'next window' to Columbia. Listened to other boats talking to Chris Parker, our weather guru, and there was a short window at the end of last week, and then possibly another one in another week or so. Well, I called Saturday, to see how things looked, and he said if we wanted to leave, we should leave Sunday because things were really going to pick up by the end of the week and the cold front that was supposed to knock down the Columbian low wasn't going to happen. Oops, not ready that soon. Guess we'll be here for awhile!!!
Amazed at how busy Aruba is, between the airport and the cruise ships

. Has to be the busiest small island we've seen!


We're enjoying our time with Mark and Deb on Sea Cycle, even though they're working way too hard! I even feel guilty sometimes - but not for long. Rented a car this weekend for provisioning (in case we could leave soon) and touring with Mark and Deb and Louis on Coqui. Louis has been here for 6 weeks, so he was our tour guide since he knew where everything was. We had been told the provisioning here was amazing, and were kind of surprised at that after visiting the local Chinese supermarkets. Turns out you have to walk a couple of miles out of town to find the IGA a 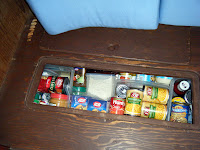 nd other huge supermarkets (still all Chinese run). Then visited the Price Smart and plan on 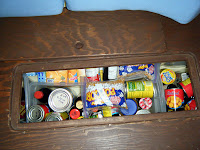 heading back there again before we leave. You might pay more for paper and canned goods, but the meat selection and prices here are unbelieveable. Fantastic cuts of meat for amazingly low prices.
We are provisioned!

We celebrated our 22nd wedding anniversary on Saturday. Deb, Louis and I (along with Barb on Evening Star) shopped at Price Smart in the morning, and then Dennis and Mark too 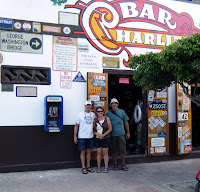 k off on errands. Ev

eryone back to the boat, a quick lunch, and then off with Mark and Deb on a short tour down to San Nicholas, with a stop at the famous Charlie's Restaurant for dinner. Back to the boat for champagne and a relaxing evening. Called our son Shaun to wish our little Emmy happy 2nd birthday!
Yes, she's ours, she loves her chocolate!

Up Sunday to tour with Mark, Deb and Louis. Dennis' driving is sometimes scary - what's with the One Way? He's only going one way! Anyway, we all survived and had a pretty good tour, s

eeing the lighthouse at the northern end of the island, the natural bridges, the Grotto with 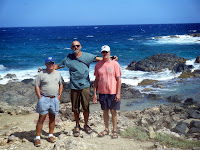 the Virgin, the church, and finding a really good spot for lunch! A fun day. 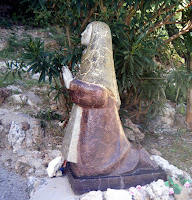 Anyway, it looks like we'll be here longer than we thought, but that's really not a horrible thing. There's beaches, and town, and walking, and shopping! ~~~_/)~~~ 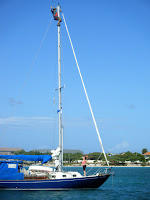 Here's Mark up the mast with the last of his SSB installation.
Posted by audreypaige at Monday, December 07, 2009