Shelter Bay to the San Blas

It was finally time to leave the marina after hugs from Lynn and Randy on High States and promises to meet up again in the San Blas. Our first stop was Naranjo Abajo, one of two islands about 6 miles from Colon. A good first stop. Pulled in and there was a catamaran already there. Peter from Kokomo came over to say hi, he thought that was us. Peter and Petra had left their boat in Portobello while they were line handlers on a few boats going through the Canal, so we saw them quite a bit when we were 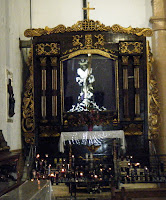 in Shelter Bay. Relaxed for a couple of days and then headed to Portobello. I guess we were lucky with weather, since we found it a great anchorage over on the north side by the fort. Lots of walking, exploring and 4 small grocery stores. Also caught up with Brian and Sue on Darramy and spent some time with them again!

View from the fort at Portabello above, and the Black Christ, the famous Portabello tourist attraction


Our next stop was Isla Grande, where there's a rumour about fantastic ice cream! Found a great spot to anchor, off a beautiful beach, just behind Not So Interim. Marie Elena was good enough to point out where to tie the dinghy up to walk the shore and where to find the wonderful ice cream! Okay, $14 for 'ice cream' is expensive, but this was more than just ice cream. It was a chocolate ice milk, which came with some cookies (okay, so they were animal crackers ... I'm okay with that!) Plus, when you haven't seen anything resembling ice cream in forever ... well, we thought it was worth it! 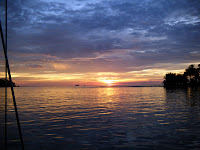 A beautiful sunset off Isla Grande


Had a great sail down from Isla Grande, passing to the north of the West Lemmon Cays, through the Eden Channel and anchoring in the East Lemmons. Stayed for four days and mostly swam off the boat and chilled! Heaven after all that work in the marina. Finally put the dinghy in the water because Mike and Linda on Casa Del Mar were in Chichime, so we needed to see them before they headed up to Shelter Bay. Yes, they had picked up some stove alcohol for us, but we also wanted to spend some time with them. Hopefully we'll meet up with them again next season! So good to see the two of them again!
Next stop, Coco Banderos, where Rose and Tom on Sojourn are also planning to head to Sapzurro, a 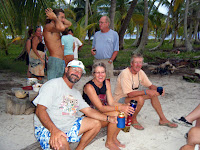 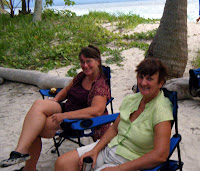 A beach bbq at the Cocos, meeting new people and catching up with old friends. Garbage burning, a walk around the island, and time to leave to head east to the Panama/Columbia border and do that checkin/checkout thing to make all the Customs and Immigration people happy. ~~~_/)~~~ 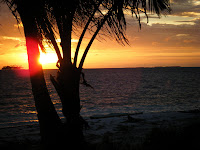