Amazing how there's always photos of the cool stuff we do, but none of the work. Guess that would be because we're so busy working, neither one of us thinks to haul the camera out.

Roger picked us up from the airport, and was probably pretty worried since we were almost the last ones out from the flight. They had to check our bag for the knee pads. Cannot find any in Panama, so brought them from home. Everything else checked out, and then we were on our way to El Tapiz to drop off our foam for our new cockpit cushions. Really, with material and labor at $100, how can you go wrong? Seems to be an issue picking up our EPIRB which was supposed to be getting a new battery. They thought it was just having a vacation from the boat and it wasn't done ... 6 weeks later! After a couple of trips, it was decided to leave the money with Roger to pick up and deliver to Shelter Bay when he was there next.

Collapsed at the Milan after a busy day of travelling and running around on errands, and then, once again, Roger picked us up in the morning to drive us to Shelter Bay. Way too much stuff to travel on the bus with! Got into the hotel room, dropped all of our luggage off, and off to the boat to start cleaning. YUK ... mold everywhere! So glad we have 5 days in the hotel. After long days on the boat, at least we can go back to air conditioning and collapse. Dennis worked on the boat Saturday while I took the morning bus in to pick up groceries. Everything went well. Cleaning everything, getting rid of extras! Dennis was able to take the cutlass bearing out without dropping the rudder, and had the new one in the next day in 20 minutes. My hero!

We had the yard work on blisters on the boat while we were gone, sanding and filling, so once they were done I started with the bottom paint. Another Bayfield, Windborne III, has sanded down their waterline, put a couple of coats of hard paint on the waterline and then the ablative. I did that and I really hope it works. I hate when the waterline looks horrible when the ablative wears off!

Spent an extra couple of days in the hotel while we continued to put the boat back together. Yes, expensive, but we're heading back to the San Blas where we won't spend any money! The only unhappy experience was when they were putting us back 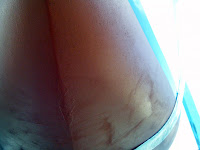 in the water, the truck operator backed up too fa 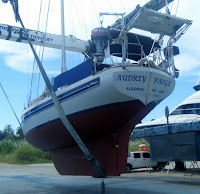 st and hit the jackstands at the front of the boat. That resulted in 2 big chunks out of my new bottom paint (right to the hull) and smudged where the 4 jackstands were. I was not happy! I complained (yeah, go figure on that one!) and so far we haven't been charged for some of the yard work. Stay tuned!

Audrey Paige ready to go in after the touch-up, and a couple of the big SMUDGES!


Frank and Gretchen on Infinity came back at the same time we did, so we had a great time with them again. A couple of dinners aboard Audrey Paige and Infinity where there was way too much wine consumed! We even did dog sitting for Loki (the best boat dog) one day. Headed in on the bus to Panama City, where Roger met us to pick up our cockpit cushions (I love them!!!), take us to Price Smart, Riba Smith, and all the little things we need that he knows where they are.

Really did enjoy our time in the marina, catching up with old friends and meeting new ones. Lynn and Randy on High States pulled in to re-provision (it's much easier from the marina), so we got to catch up with them again. Burt and Marie Elena from Not So Interim were there, and met Karen and Ralph on Five Islands. They are really trying new things at the marina. Tony, the restaurant manager, is doing a Saturday night movie night, with restaurant service upstairs, and he rents the movie for everyone to watch.