Can't believe that we've only been gone a couple of months and we're back here with chores and provisioning to do again. Hmmm ... might have been all that time we spent snorkelling in the San Blas doing very little on the boat. My friend Brigitte always told me that if you were going to spend the money on staying in a marina, then you really had to be productive to make it worthwhile. I hate that that's still in my head 8 years later!!!!

A successful docking (although I was a little worried since we were in the first slip that I've only seen catamarans in!) and the first people to greet us were Deb and Mark on Sea Cycle. So good to see them again. Then, Lynn and Randy on High States wandered over. Old home week! Bob and Sue on Sunrise were doing a dock walk and stopped by and invited us over for Thanksgiving dinner. We had met them this summer in the San Blas. For a change, the marina is full of returning Canadians and very few Americans. Shaun and his girls were having Thanksgiving dinner at Kelly's house, so we got to Skype them and see all those wonderful little faces. Wish the other two would download Skype so that we could see all the grandkids (yes, that means Tania and MA!)

Had an amazing dinner aboard Sunrise with Bob and Sue, Buddy and Lorraine (Black Dog), Lee (Serenity) and Steve (Better Days). Luckily those 35 Morgans are very spacious. Turkey, dressing, potatoes, cranberries, salad, appetizers and dessert (I made cherry cheesecake tarts). Everything was delicious and we had a great evening. 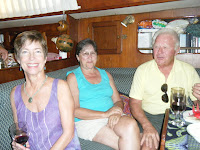 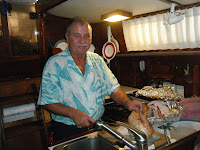 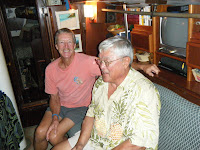 
Spent a little longer in the marina than we wanted to because Roger wasn't available to run us around Panama City until the Tuesday after Thanksgiving. Took the bus into Panama City with Deb from Sea Cycle and had a very successful day of shopping at Abernathys, Price Smart and Riba Smith. The first is a marine/fishing store, Price Smart is a Costco type store, and Riba Smith a wonderful grocery store that stocks all kinds of US stuff. Since Deb and Dennis are the ones who do the fishing and the sewing, they did a lot of serious shopping and consulting while I just meandered. Hit a few hardware stores, material stores and others along the way before Roger dropped us off at the marina around 7:30 that night. It would have been sooner except for the fact that we were stuck for almost an hour waiting for the locks to clear before we could proceed across the bridge. Frustrating. And poor Roger had to not only turn around and drive that hour drive back to Panama City, he then returned first thing in the morning!

Spent Wednesday putting everything away and doing laundry, hoping to leave the marina Thursday morning. By the time we were ready to leave the wind had picked up and basically pinned us to the dock. We had planned on returning to the Rio Chagres, but Sunrise told us to be careful because, depending on the swell, the entrance could be dangerous. We hadn't thought of that since we were there in calm conditions last time. Decided to hike up to the fort, which marks the entrance to the Chagres, and check things out. After all, it was only 9 kilometres. Really, I think it was just 'a little' more than that. Luckily it was all paved road, and 2 hours later we were checking out the area. Saw a couple of tourist buses headed up and back, thinking, darn, missed a ride back down! Decided that while the anchorage looked good, there were some pretty big swells and, with reefs and sandbars all over the entrance, it wasn't going to happen. Saw a couple of buses at the Fort, but we had no money with us. Turned out it was a school outing, and the kids were having a great time playing Red Rover in the rain.

Waved to the bus drivers on our long hike back down, hoping to make it before dark. Oooooh, scary things come out in the dark here! About 20 minutes into our walk, now raining heavier, the first bus came back down, honking his horn, lights flashing (you've seen these buses on earlier blogs, they are so cool) and told us to get on, he'd take us to the bottom. Thank you, thank you to the bus named The Whip from the Sabanitas area. These kids are amazing - the bus is going full speed down this hill, around corners, while we hang on for dear life - and they're all in the back seeing who can dance the best. I'm sure that every muscle we have will ache tomorrow. Lynn and Randy were in the hot tub (well, semi-warm tub), so we went back to the boat, got drinks, and joined them in the rain.

It's been a busy time, but also a lot of fun in the marina. Peter and Eileen on Appleseeds are back as well as Brian and Sue on Darramy. Darramy shared their experiences in the Bocas, gave us some tips, and we'll meet them up there around Xmas time to hear more of their wonderful summertime experiences. Machu Pichu, Chile and a cruise to the Antarctic!