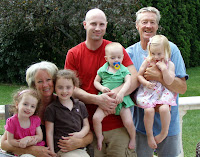 Well, here we are back in the north! We had a long day of flying and waiting. The flight leaving Grenada was late leaving because they couldn't start the truck that pushed the plane back. Then, there were thunderstorms in the States, so the flight arriving into Miami was 2 hours late - which meant a nine hour layover instead of seven. Charlie and Parker were there at midnight to pick us up from the airport, which was great!
We've loved being back and spending time with the grandkids. We still haven't seen Cody and 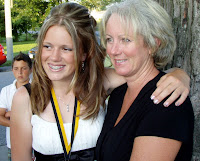 Madison, but have talked to them on the phone.
Had a fun day

with Char, Kelly, Parker and Brooklyn, and Shaun and his girls, Avory, Ryenn and Emmy.
Then there was Taylour's graduation from grade eight. What an absolutely beautiful young lady. And the best thing is, we get to take her back to Grenada with us for three weeks. We are all so excited.
Went and watched Zach's baseball game yesterday, and is that kid a good ball player, just like his mom!

I've posted some new photos on my Picasa Web Albums on the sidebar, so enjoy.