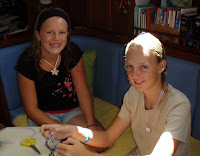 We still can't believe how fast the time went with Taylour on board. Her last morning she got up early (7 a.m.) for eggs and toast; a swim in the pool with Jenny from Opus; back to the boat for some jewelry making; then, tears, time to go. As I said, she was wond

erful, we loved having her with us and miss her very much.

There she goes, she's leaving us~

Unfortunately, it's now time to get some serious boat chores done. Well, first off, the most important thing was taking the dinghy into the Carenage to The Best Little Liquor Store to stock up on wine. Yeah, who can believe that? Getting out of this slip at Pt. Louis Marina scares me to death, since we're tied sideways between 2 boats that aren't. Junior, the Dockmaster, was wonderful. With some help from shore with the lines, and Junior towing us midships, we were off and running. Well, then we had to avoid the large tanker coming into the lagoon. Pulled over by the beach, raised the dinghy and off, back to Prickly Bay where we can swim off the boat and, most 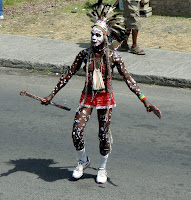 importantly, do laundry!
The costume Carnival was held on Saturday, after it was cancelled on Tuesday due to rain. We took the bus downtown, walked around, took photos, then back to the boat to swim. It's been so, so hot.

Well, we've spent the 3 weeks since Taylour has been gone between Clarke's Court Bay and Prickly Bay. In that time Dennis has had MAJOR projects. I think it took over 2 weeks to install the SSB radio (that's single sideband) since there were so many components to install. First the radio itself - take out a drawer, install by the chart table, put the drawer face back in and put the trim around the radio. Then, running the copper was real fun, and after that, the tuner. Let's just say, the poor man has bruises everywhere, and spent 2 weeks either in the lazerette or with his head down in the bilge. It's working now though. Although, the first day we went to test it, we tuned into the Coconut Telegraph on SSB 4060 to see if anyone could hear us. Since it's summer and everyone is pretty well in place, the only boats checking in were from Clarke's Court Bay, 3 bays away!
All of the installations are a challenge, and then stuff just breaks! A couple of major water leaks. The hot water hose for the shower sprung a leak. Luckily, I caught that right away and we only lost about 15 gallons of water. Then it was time to fill up, so Dennis carted water, 25 gallons at a time, back and forth to the boat, humping cans up onto the deck to fill up - did that 4 times! We are so careful at conserving water, and then the cold water hose broke and emptied everything but 10 gallons before I caught it. You know, we have a bilge pump alarm and I kept wondering why he didn't have it turned on! It's back on again now. Turn around 2 days later and repeat the process. And we wonder why our backs are sore! I've spent the last 4 days stripping all the Cetol (varnish) off the cockpit area, sanding, cleaning, and decided I'm going with teak sealer this time. So far, so good. Another coat of Cetol on the bowsprit and trailboards, then 4 coats of gloss, and that's done. Just need no waves to do that. Next project is stripping the jerry can boards, and then cleaning the floors below. I don't think this ever ends!
I'm hoping to leave here at the beginning of October, at the latest, to head to Blanquilla, the Roques, Bonaire and Curacao. I'd really like to be in Columbia by the beginning of November. We'll see. ~~~_/)~~~
Posted by audreypaige at Sunday, September 06, 2009

And I wonder why I'm looking forward to getting back to the boat....I'm sure there are surprises waiting for us too!