Wishing everyone a safe and happy 2010!! 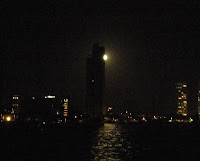 We had planned to head into the Old Town for New Year's Eve, but there have been problems with dinghy thefts, and then there was a report of a few boats being checked out, so we chose to have a quiet night at home -- again! It seems we always have these plans to head out to party for the New Year and it just doesn't seem to work out. Dennis went to bed around 9, but I stayed up, played on the computer and read until midnight. Of course, with the 6-8 different displays of fireworks, the Navy and Coast Guard ships sounding their horns, along with a couple of container ships and all the cruisers, you'd have to be a pretty sound sleeper to miss the New Year. There were fireworks for the next four days at all different times of the night and early morning, along with lots of bands playing. Not quite sure what that was all about. Luckily, I can turn on the fan in our berth, it makes for white noise, and I can sleep through just about anything.

We're enjoying our time here in Cartagena, exploring the Old Town, visiting the Fort, the Gold Museum, the Inquisition Museum and, of course, the huge mall. A couple of happy hours at Pacho Y Guilios, meeting new people and catching up with old friends. 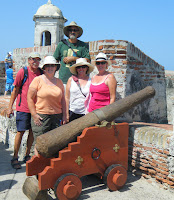 From the Inquision Museum - scary! 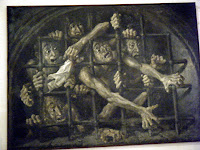 Exhibit from the Gold Museum
A tour of the mud volcano was supposed to be a highlight from what we'd been told. Well, their idea of a volcano and mine were a little different. Let's see, an ant hill with a hole in it? Anyway, it was an entertaining day. Alex, a local tour guide (and wonderful if you're looking for someone to take you around who speaks excellent English, and is good looking as well!) arranged for a van to take 13 of us to the volcano. Not at all what I expected. There was a cruise ship in and way too many people. Somehow, I thought we'd be hiking and it would be remote. NOT! It was interesting though. After you climbed up (and I don't like heights), you had to slide your way around to the pit, climb down, the guys helped you in, floated you across to the other side where another guy gave you a massage (hmmm, why did Dennis' last longer than mine?), then pushed you off to the side again, where you joined a group of bobbing people trying to get out. Moira from Equinox has the most unique laugh - one that always makes you laugh as well. Well, as she said, she felt like a Weeble and couldn't stay straight. I had the same problem! Every time someone bumped into me, if my feet went back, eeek, up went my butt! How did that happen? We finally climbed out, with someone else scraping mud off of us before we headed down the very slippery steps on the way to the lake for the fresh water rinse. There, the ladies were waiting to strip you of your bathing suit and help rinse you off. Very interesting is all I can say. Dennis said that's the first time in over 20 years another woman, besides me, has taken off his pants! For that pleasure you were expected to 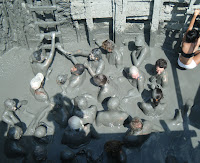 
This is what the 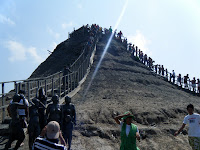 Then the mud pit.
At the bottom of the steps with Jean, from California, visiting family on Deja Vu from, get this, Windsor!!

At the end, Mark and Deb on Sea Cycle, nice and clean, enjoying a drink. Then myself with Moira, Deb, Moss and Rick waiting to get back on the bus. 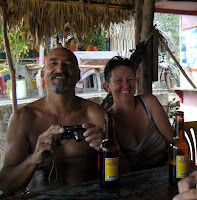 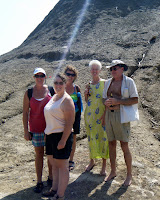 One of the scenic stops on the river, where the fishermen put up a sail.

Provisioning and getting ready to leave. The city of Cartagena is beautiful, but you can't swim in the anchorage, everything just gets so dusty and dirty, and the boat traffic is horrific! Constant rocking and rolling, starting about 6 in the morning. On to the Rosarios and San Blas - peace and quiet again! ~~_/)~~