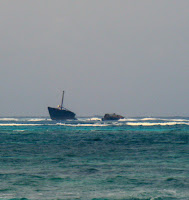 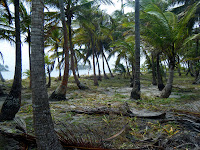 Left the Lemmon Cays finally around 11 a.m. Dennis had gone fishing and running around while I made bread, thinking it would rise while we sailed to the Eastern Coco Banderos. Well, had a great sail, but punched down that bread about 4 times, so by the time it was ready to bake it wasn't a real fluffy loaf.

Pulled into the anchorage, with the Bauhaus Guide in hand, between the reefs, and the anchorage was packed! Ended up anchoring in the northern most anchorage. A beautiful afternoon, baking bread and swimming. Well, wind change and tide change turned that around! Rolled all night long. Not a fun night. Watched the boats steadily pulling out of the middle anchorage and called Breeze and Debbie on Blue Sky to ask whether they were rolling. They said no (of course, they are a huge motorsailer, so that probably makes a big difference), so we picked up the anchor and moved in between the next two islands to a finally calm anchorage. Burned trash, walked around the northern island, and stopped by Blue Sky to say hi and thanks. They were having a beach bbq that night with their guests, and invited us along, so off to prepare veggies and dip.

A Kuna boat stopped by and asked is we would charge their cell phone. We had been told this would happen. No power on many islands, but they all have cell phones. Had an enjoyable evening with Breeze, Debbie and their young guests from Vancouver.

There's been some cloudy weather and winds that have been blowing in, so snorkelling has been a challenge. We couldn't get out to the one reef we wanted, but did some dinghy exploring and did snorkel the southern reef. If the sun had been out it would have been amazing!

We're starting to run short of water, so time to head to Rio Azucar to fill up. That was confusing. It had been explained to us, but until you're trying to pull up, you're wondering where the heck the dock really is. A couple of Kunas grabbed our lines and helped direct us to the office to pay the $5 dock fee and the $10 to fill up with water. Then another young man escorted me around town to see if I needed anything. Bought some eggs and potatoes, but they didn't have much else. Wanted bread, but that wasn't available. Two hours later, our 100 gallon water tank was full, 20 gallons on the deck, the 2 1/2 gallon bucket and the tub. Threw the white laundry in the tub to slosh around while we headed to Nargana for gas and diesel.

Made our way through the shoals and reefs into Nargana and had a relaxing afternoon. Unfortunately, the water isn't real nice here, so no swimming off the boat. Something I really, really miss. Put the dinghy into the water the next day to head in and figure out town. Frederico met us at the dock and took Dennis to get gas and diesel and take it back to the boat. We were trying to find vino tinto (red wine), and, you know, it was always going to be there in the next couple of hours ... maybe! We made the $5 donation to Frederico for the fund to educate the Kunas on garbage awareness. He then walked us all over the little island (where I wanted to take photos but my battery on the camera died), and then we crossed the bridge over to Corozon de Jesus and walked around, picking up some wonderful Kuna bread. Ten little loaves for 75 cents. Stayed around the extra day because, you know, that red wine was going to be here in a couple of hours. It wasn't!

Picked up the anchor on Saturday morning and had a great motorsail over to Green Island. It's been cloudy, so needed to charge those batteries. Again, another beautiful island where we can swim and the water is wonderful! ~~_/)

Posted by audreypaige at Friday, February 12, 2010