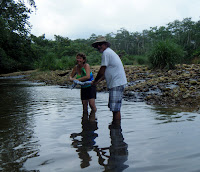 Spent our time in Nabadup catching up with old friends again, and then introduced Mark and Deb on Sea Cycle to river washing! Took another dinghy trip up the Mangales River to do some more wash and explore with them. (Actually have a photo of Mark doing laundry, and this is it!!!) The no-see-ums ate me alive, but that wasn't the worst part. Forgot about that red pareo that bleeds, and when we got back to the boat, everything light colored had red stains! Luckily we had brought back 20 gallons of river water, which we had planned on using as shower water, but instead used 5 gallons to re-do our whites. Dennis was much more patient than I was, and soaked, rinsed and put the clothes through the wringer many times to get the stains out while I hung everything off the shrouds and lifelines. What an exhausting day!

By the time we got back to the anchorage Equinox had left to explore other islands. Rose and Tom on Sojourn stopped by and asked us to come over after dinner to play cards. It was a struggle, but we made it, played a great card game called Sequence and had a wonderful night. Deb, Rose and myself were having so much fun having hot flashes, while the guys rolled their eyes and went, "Oh, this again!", like we do this on purpose to make their life miserable. Oh, there's a thought!

Time to change anchorages, and off we went to Salardup. The sun was up so we were able to see the reefs and exit from the Nabadup anchorage instead of having to go all the way through Cambombia and around. We really needed to charge the batteries, but put the jib up and we were doing 6 knots. Finally put the boat in neutral just so we wouldn't overtake Sea Cycle. Pulled into Salardup and anchored on a sand mound. It is interesting anchoring in the San Blas. You're either really deep or really shallow! We had planned on a relaxing night on the boat but there was a call for a happy hour on the sand spit. We hadn't planned on going because we were so tired, but there were all these old Trini boats that we just had to get together with again. First, there was George and Pixie on Silver Sea that we first met in Marathon, Florida; Jeff and Una on Dragonfly; Gary and Linda on Rainbowrider; Bob and Jeannie on Island Dreamin'; Burt and Marie Elana on Not So Interim; and, of course, our ride for the night, Mark and Deb on Sea Cycle. Wonderland we had met in Blanquilla 2 years ago; Two By Sea; Dances with Dragons; Deja Vu ... and a few other boats I didn't meet. 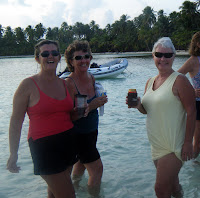 There's a group of guys you don't want to meet in the dark!

Tired of boat chores, so relaxed and then went snorkelling with Mark and Deb. They think they saw a snake. They have this thing with snakes on the boat - snakes love to make their way aboard Sea Cycle. Actually, when we looked it up, we think it was a pipe fish. It was kind of rough, so we couldn't get to the outer reef, and the inner reef was just okay. Well, I have to say, it was much better than anything we saw in Antigua last year. Exercise for the day ... back to the boat to collapse, relax and make dinner!

Posted by audreypaige at Friday, February 19, 2010