So, had an absolutely wonderful time in Panama City. The guys went and did their stuff and Deb and I went shopping, mostly in grocery stores! Picked up all kinds of good stuff and our rooms were absolutely stuffed! Waiting for the guys to come back from their shopping, I brought my computer down to Mark and Deb's room so we could do our internet stuff, have a glass of wine and unwind. Well, Skype was on and our phones were ringing, so there went our unwinding time. But, great to talk to everyone again after being out of touch for so long.

Our second night in the city we walked and found a great Mexican food restaurant, then back to the room to take long showers and finish up all the internet stuff we needed to get done. I finally got to talk to my cousin Adrian who now lives in New Zealand. It's a little tough with that 18 hour time difference. I was online till 2 a.m., getting everything done while I can. Up early the next morning, down to pick up a cafe con leche in the restaurant, and off to do our last grocery shopping. The taxi driver was only going to charge us $3 to take us back to the hotel, until he saw all of the groceries, and then it was changed to a whopping $4! Where are we going to put all of this?

Back to meet up with the guys and a last minute running around fiasco for Sojourn - frustration! We needed to hit the bank one last time, so finally found one and practically ran back to the hotel to get in that last little bit of internet and groceries down to the lobby! Many trips later, everything was in the lobby, with more than one person commenting about how much room our stuff took up. 'Walmart?', asked one gentleman. Phoned our driver to make sure he was going to show up. Hmmm -- he'll be a bit late, maybe 20 minutes. Forty minutes later he arrived, but then it took another 20 to pack everything into and onto the truck. Took off down the highway with Alfonso, with the back end of the truck swaying back and forth. Stopped for gas - oh, the truck doesn't start. Had to pop the clutch going downhill with a transport riding up fast behind us. Mark kept telling him that they had a saying in Canada - DRIVE TO ARRIVE ALIVE! We repeated that many times, but it didn't seem to make a difference. Stopped for McD's takeout, and at one point I commented to Deb that I never thought my last meal would be a quarter pounder with cheese and fries! I was hoping more for steak and potatoes! What a trip!!!!

Finally made it off the highway and onto the dirt road. All I can think of is that the Kuna Yala border closes at 4:30 and between the two boats, we probably have between $400 to $600 worth of meat and cheese. Let's see ... 2 flat tires later ... The first flat was before the border and luckily Alfonso had stopped and picked up a jack from a truck at a construction site. 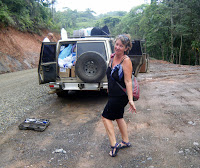 While they were fixing that flat, another truck stopped and swapped his flat for their sp 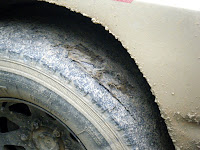 are - THANK GOODNESS! Just got past the border around 3:15 when we had the second flat. By this time I'm watching the ice melt and run down the windshield from my cooler on the roof. Got the second flat fixed and hit the river, which was high. Might have made it through the river and up the embankment, except for that bulldozer coming down. So, had to stop and just had a heck of a time getting through the mud. Oh, turns out his 4 wheel drive isn't working!!!!!!!!!! Trucks coming down so that we couldn't get up, but finally the 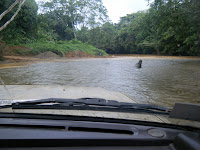 bulldozer cleared the way and, amazingly, we made it through. 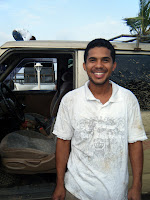 The truck wasn't great, but our driver was cheerful through it all!
Found a panga to take us back to our boats for $10 a couple and it was well worth it. They pulled up to our boat, they helped tie off, then 2 of them hopped out and passed things down to me in the cockpit. They were great! 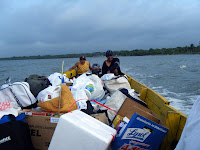 We had some of Sea Cycle's groceries and they had some of ours, but we figured we'd straighten it out the next day. We worked till about 8 p.m., then collapsed and finished up the next day with storing and vacuum sealing! A fun time but we're exhausted!! ~~_/)~~