Through the Panama Canal

Well, did we get lucky. After I returned from the States we quickly made our way up towards Colon and Shelter Bay Marina to install the motor mounts I had brought back. Not much of a choice with fruit and veg in Nargana, and then no veggie boats to be found, but got lucky and found a veggie boat just heading out by Porvenir after we checked out. Luckily, a calm night and out the next morning just after 6 a.m.
Checked in with the morning Cruising Net on 6209 on the way from Porvenir to Linton, then anchored in Linton after a long day of motoring with no wind. Not really what we wanted to do with questionable motor mounts! Had a 4' wahoo right next to the boat, but when I took over the pole he decided to make a run for it and spit the lure right next to the boat. And wahoo being our favorite fish to eat! Took the dinghy over to the anchorage at Panamarina to check out the availability of mooring balls for August. Nothing available, but had a great lunch of cheeseburger and fries. Restaurants are few and far between down here, so that was a real treat to have someone else do all the work!

Up the next morning to head to Shelter Bay. Turned the SouthWest Caribbean Net on again, not planning to check in, just wanted to listen. Relaxing in the cockpit when we heard Antipodes checking in and looking for line handlers to go through the Canal the following week. I made it down below in record time to say that we'd love to help them out. Dennis said afterwards we should have checked out what kind of boat it was first ... it could have been a 26' sailboat. Said I didn't care, it was a great opportunity. Turned out to be a 55' steel trawler with owners Jim and Lara and their guest Dan. Great boat and really nice people - how lucky was that??


Lots of work to do in the marina (I'll post that on a later blog). The first departure was supposed to be Wednesday, but ended up being a Saturday/Sunday transit. It was a delay for them, but actually worked out better for us. We got on to Antipodes on Saturday afternoon, after lunch, a swim in the pool and a shower. Headed off to the Flats around 2 p.m. to wait for the Advisors/Pilots to board the 3 cruising boats heading through the Canal. There was Antipodes, Ruby Slippers and Thule. Our Advisor was Jose, who was a tugboat captain doing this on his day off. Being the bigger boat (wow, how cool is that to say?!), the Advisors decided that the 2 sailboats would raft off to us while Jim steered us all through the locks. He said he likes to call those fiberglass fenders! Worked out great for us (well, us as line handlers), since the sailboats did all the line handling and Jim did all the helm work. Bow and stern thrusters sure are nice. Tied up to the mooring ball in Gatun Lake around 8 p.m., ate our cheeseburgers and beans an 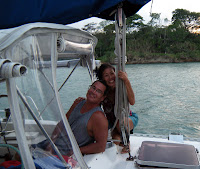 John and Ivy on Ruby Slippers 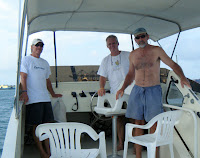 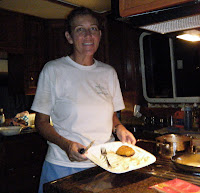 Dennis with Captain Jim and Dan


Up the next morning at 5:45 when it started to rain and it was like throwing a switch and the howler monkeys started up. Our next Advisor was Ricardo, who was an instructor at the maritime school, teaching people how to navigate the Canal. We left the mooring ball around 6:30 in the morning and arrived at the locks around noon. Shaun was the only one to see us on the Miraflores Lock web cam. We said we'd wave, but he said it was just kind of a blur! We actually had to handle the lines this time, but it was fun. The Erie Barge Canal is much more challenging, since it's a side tie. A center tie, with someone throwing you monkey fists (small lines) to attach to your larger lines is much easier. Well, that's if they can throw. The guys at the Miraflores locks had a challenge or two and need to improve their aim! 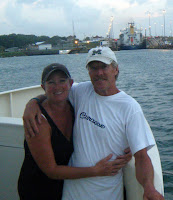 I think we're having fun!!!

The Panama Canal crew of Antipodes

Through the locks and tied up to the the Balboa Yacht Club mooring just after 1 p.m. A couple of days and a lot of fun. Took the taxi boat in, had a drink at the Yacht Club and then a taxi to Costa Inn. 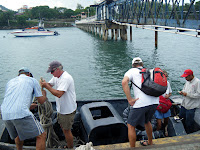 The water taxi on the left and Dennis with Captain Jim and Antipodes in the background on the right
Dan, who helped Jim and Lara bring the boat from Puerto Rico, didn't have anywhere booked, so I called the hotel and we got him a room as well. We checked into the Costa, relaxed, showered and met up for dinner. Walked for a bit to see if we could find a restaurant, then took a taxi up by the Vegas Inn and went to the Brew Pub where we had dinner with Sea Cycle. Reasonable prices and fantastic food, and Dan insisted on treating us! Spent an enjoyable evening, then met him for breakfast the next morning. He headed out on a walk before his flight left, and we went to try Immigration stuff, which didn't work out, so took the air conditioned bus back to Colon for a whole $2.50 a person.