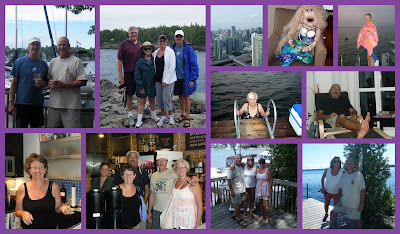 Had a wonderful two weeks staying with either Kelly and Char or at Shaun's, and then decided to give them a break from us and visit our Canadian friends for a week.

Headed up to Brockville, Ontario, in the Thousand Islands, to visit with John and Brigitte. As always, tons of fun. The scary looking mermaid is Brigitte's new puppet! Got up, walked around town and then took a car trip, crossing over the Thousand Island Bridge to New York State; then drove down to Clayton, doing tourist stuff and taking two ferries back over to Kingston where we had dinner and ice cream before heading back home. The next day we got up and headed down to Mystic, their 35' Niagara. Just a short little motor to their yacht club's island, where Brigitte made lunch, we went exploring, played a mean game of Mexican Train dominoes, and then ate a fantastic dinner. Motored back to their berth, put Mystic to bed, and then ourselves!

Up the next day and after breakfast went over to see Brigitte's dad's beer stein and photo collection. What a wonderful 83 year old! Then, on the road again, heading to Toronto to visit with Mark and Deb (Sea Cycle) at their condo in Toronto.

Amazingly, hit no traffic and we were there in no time. Thought about going out, but just hung out, with a little wine, and caught up. What a view from the 49th floor down by the Lake!! Spent the next day on a walking tour and stopping by the Rustic Cosmo Cafe - Deb's cafe, now run by their daughter Nicole. Okay, if you're in Toronto, you need to stop by this place. Neat looking place in the artist district, and the food is amazing!! (They're on Facebook) That night we had a great time -- dinner at Mark and Deb's, and visiting with old cruising friends Cliff and Deb from Watermark, who actually live down the hall! Haven't seen them in about four years, so there was lots of catching up to do. A very, very late night! The next day Mark took Dennis on another walking tour of Toronto while Deb and I went shopping. I think Dennis actually likes Toronto now!

Time to travel again. Left Toronto and headed over to Lake Huron, where our friends Sue and Dan have a beautiful home. We were there about four years ago when it was still being built, and now we were able to see the finished result. All we both can say is -- WOW! They did a fantastic job. Dan had a second knee replacement two months ago, so we went on a short hike, which he was able to manage, and then had lunch in Tobermory. That little town sure has changed since Dennis and I were last there. Eeek ... Sue and Dan actually went in the lake for a swim. Dennis stood on the shore wrapped in a towel, waiting to go into the hot tub.

Alas, all good things must come to an end, so we said goodbye to Sue and Dan and headed back to Michigan. Took the scenic route all the way, including catching the ferry from the Canadian side over to Marine City in Michigan. That was so much better than waiting for an hour on the Sarnia/Port Huron bridge!

Back to Shaun's first, where we were welcomed with little girl hugs and kisses!! ~~~_/)~~~

Posted by audreypaige at Monday, September 13, 2010