On the way to Cartagena

We went to bed early on Christmas night, 8 p.m., and then up and underway from Rodadaro at 2 a.m. Absolutely no wind so Dennis left the sail full with no reef. Luckily, Evening Star had pulled out an hour ahead of us and radioed back that they had 20-25 knots of wind. Okay, up on the deck to put a reef in! Equinox hauled up their anchor just after us, and then Coqui. Lewis on Coqui called and said he was having electrical problems and that his navigation lights had gone out. He'd put his anchor light on and wanted to know if we could see him. We were just able to see him. Unfortunately, he was having many problems between the electrical, his motor and then he thought his alternator, so he had to shut his motor down and sail. That was the area with no wind. Equinox was closest and said they'd come back and help him if he needed anything. He wanted a tow, but we had started to have quite large swells (8-10 feet), and they were a little leery about that. Luckily, Coqui was able to contact the local Coast Guard, they towed him back to Rodadaro, and Equinox was underway again.

Well, those winds did pick up in a hurry, as did the waves. Unfortunately, the moon set just as we were picking up anchor, so it was a pretty dark night. The winds turned out to be 25-30 knots with gusts over 35 and 8-10-12' seas. We were way overpowered, but I didn't want Dennis on deck in the dark, even though we both had our lifejackets and harnesses on. Some of the waves were cresting and breaking over the leecloths and into the cockpit. After getting totally drenched twice, we put our rain gear on. This is called not a fun night!! As it started to get light Dennis finally went on deck to put the second reef in and the relief was instantaneous. (If anyone remembers, I was the happiest person ever when the old sail split and we had to sail for 2 months with a double reefed main.) All that movement on deck made Dennis a little queasy, so he did not have a fun day. We finally pulled into Punta Hermossa around 2:30 in the afternoon, getting a good hook with the still high winds.

Quest left at 8:00 at night, and Equinox and Evening Star left with us around 4:30 the next morning. Equinox followed us out since their new chartplotter doesn't leave a breadcrumb trail. And boy, do I love that we do! All I know is that I woke up many times during the night thinking that I didn't want to go out in that wind. Evening Star had a few challenges with their GPS not acquiring, but they did follow us out eventually. It wasn't a bad sail, and I'm not sure if it was just because we were better prepared or the winds and seas were actually down. When we rounded the corner on the way to Cartagena, the seas died down to 6' and Dennis threw a fishing line over. We hooked two small tunas, but they weren't large enough to keep. Then, something really big hit the handline, almost pulled Dennis out of the boat, and then took off with his lure and

Entered Cartagena harbour and anchored just after 2 in the afternoon in 45' of water. This should be interesting, hauling the chain up. We had been told that if you anchor shallow, holding isn't really good and many people drag, so to anchor deep. Well, we're here now, we have a hook, and we'll worry about picking up wh 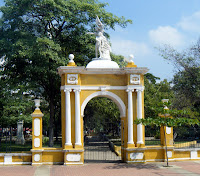 In Monday to check in with Manfred at the coffee shop in the supermarket, get local pesos out of the ATM (2,000 pesos to 1 US dollar) and wander around. Well, for Dennis, wandering around after 5 days on the boat means a forced hike. Walked around the Old City, which is just amazing, and dragged ourselves back to the boa

t to collapse after 6 hours. I'm pretty sure I dragged more than he did, since this heat just does me in.

More on Cartagena later and I'll work on getting some web albums posted!

You are in our favorite city of the Caribbean. Loved Cartagena! Enjoy!