Well, here we are, back in Cambombia, and it seems so strange to be the only boat here! We picked the only good day of the week to do laundry, since the rain held off until late afternoon, and then it rained for the next four days. Wow, what a change in the Mangles River with all the rain. We couldn't get as far up the river because of the shoals and shallow water. 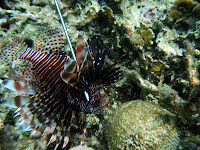 cleared a bit so we picked up and headed down the chain to Miriadup, seeing a lot of shallow water. Once again, we were lucky, and the rain held off until we did some snorkelling. Saw a couple of lion fish, which we're supposed to kill since they're such an invasive species. A shame, because they are beautiful.


A couple of days later, headed over to Moron Island to another shallow anchorage. Dennis loves that, with our manual windlass! Unfortunately, the the weather didn't clear up enough to snorkel, even though it looked interesting. Did we tell you, it is the rainy season!


Off to Porvenir to check in, then to the East Lemmons. The Silas was on the island (Kuna Chief), and while I didn't mind if he used my phone to call his family the one time, by day four it was getting a little old. We then headed down to BBQ island for the Mon 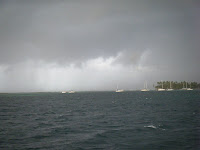 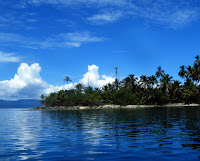 r. We stayed a week, only because Tienda Eidi was supposed to come out the following Sunday with fruit and veg. It's a little tougher to get at this time of year because there's only 50 boats in all of Kuna Yala, instead of the 160-180 during the season. It rained hard enough to fill our tanks and do more laundry.


Back to Green Island where we actually saw a shark feeding on the surface as we were pulling in, and I found lots of hamburger seabeans as I was walking the island while Dennis burned garbage. Went snorkelling and never did find all those crabs that were hanging out on the reef during the closed season. Hmm, guess they're pretty smart after all!


Down to Nargana for the day, where we picked up some more diesel and had our chicken lunch, then back to Green Island for the night. Had a nice motorsail down to Porvenir to check out with the Port Captain, and then spent a few days over in Chichime before heading towards Isla Grande. We did manage to get some snorkelling in between the rain showers.