Oh, now I remember what I hate about putting the boat away. Had a good motor sail up to Shelter Bay, with only a slight confusion. We swore they said A2, when they said D28???? New management in Shelter Bay has not impressed me so far, but we'll see what it brings.


Didn't help that I was sick for 2 weeks before we hauled, but I did as much as I could, so there really wasn't that much to do once we were in the marina. Took the shuttle into Novey to compare prices ... we'll be better picking up things in Panama than bringing them back with us! Love it, there's a first! 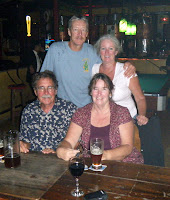 Roger picked us up from the marina at 9 a.m., along with Dick and Moira on Equinox, to take us into Panama City. Dropped us off at the Milan, and then took Dick and Moira to the American Embassy to renew their passports. Then picked us up for our trip to La Tapiz and to drop our EPIRB off to get a new battery. What a successful day. They say there's no rain and lightning in Panama City ... whoever they are, they're lying! It finally calmed down enough that we met Dick and Moira for dinner at the Brew Pub and had a wonderful meal. Up the next morning to explore the city. Well, malls to see, phones to buy, etc.

Again, Roger picked us up early to take us to the airport to fly home. Great trip! Connections fantastic and Kelly was there to pick us up with Brooklyn and Parker just as our last bag came off the conveyer belt.

Tell me more about management. Does Carlos still own Shelter Bay? email bill"at"svbebe.com