Now on our way!

So, we've said we're going, but now we're serious! Had a great dinner on Paradise with Sid and Manuela, and then Mike and Cynthia from Minx were there as well. Sid and Dennis - an LA retired cop and Detroit retired cop - the 2 nights we've been together have been midnight nights!!! They could go on and on and on and on ..... but a lot of fun.

Then there was a potluck on Calabash Beach Sunday, and that was fun. Had some great stories from Almost There from South Africa. A family of 4-5, depending what time of year it is. They took our starting battery and we really hope it works for them a l 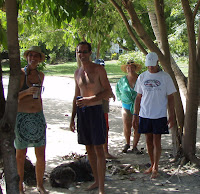 ong time. The hotel was closed so we took over the bar area to put our dishes out. The owner happened to look at his web cam and saw all these people on his property and promptly made his way down. A little panicky, until we explained that we were from the boats at the anchorage and, yes, we would clean up after ourselves. He was much relieved since the hotel is opening up again next weekend.